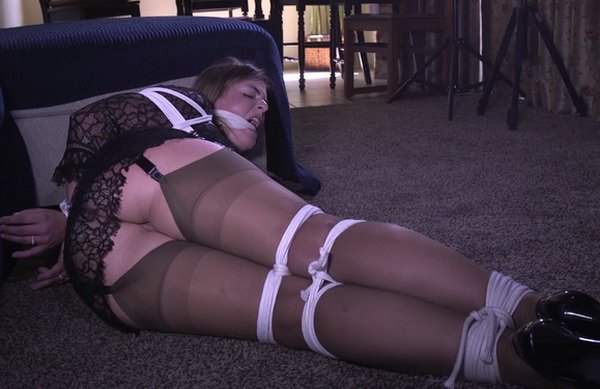 Kendra wanted this job really bad and told her new boos that she would do “ANYTHING” to get it. Then she told him that she loved to be tied up and fucked helpless. She was immediately hired and the boss wanted to have her start right away. The video begins with Kendra’s new office manager holding the phone so she could call her her husband and tell him that she got the job. She also told him that she was going to start working immediately and would tied up all day. When she hangs up, we see that Kendra is already tied up tight with rope. She is then gagged with the panties she had been wearing. When Kendra is left to struggle bound and gagged, the boss watches as she gets very turned on. But it is going to be a long work day and the boss wants his new secretary to understand that along typing and keeping his office in order, she will also have to take “Dicktation”. Kendra is very eager and can hardly wait. But first the boss wants to get her warmed up. So, he ties a piece of rope tight up her exposed pussy. This get Kendra so turned on, she can hardly wait until the boss has his way with her. Later it is lunch time and the boos removes her gag so Kendra could tell him what she would like to eat. She looks at the bulge in his pants and tells him that she wants a large sausage. The next thing she knows, the boss has her gagging on his large cock. 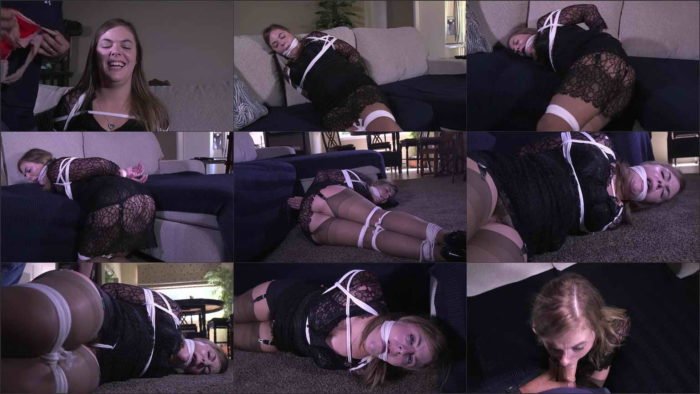 [gndbondage] We will be keeping your girlfriend bound and gagged! [Kendra Lynn, chair tied]

Kendra Lynn bound and gagged on her kitchen floor

Enchantress Sahrye gndbondage – If I could just get this wad of panties out of my mouth!