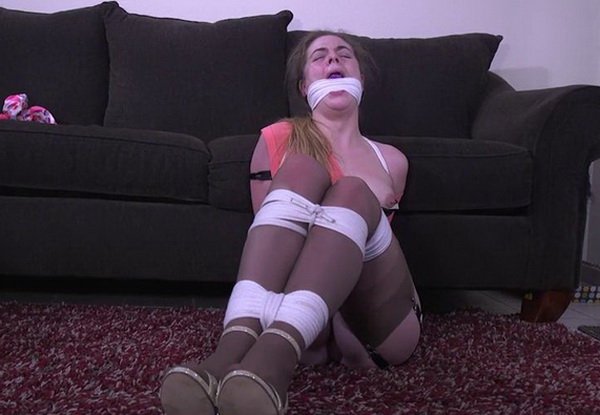 Kendra had gone out for the evening. The last thing she remembers was meeting a man in a hotel cocktail lounge. Somehow, the was the last thing she remembered. Sometime later, she found herself in a strange place. She was tied up tight with rope and there was something stuffed in her mouth. Suddenly, her cell phone rang. She tried to answer. but whatever was stuffed and tied in her mouth, kept her from being able to talk. Somehow she manged to reach up and pull whatever was in her mouth out. She saw it was a pair of panties. But when her cell phone rang again, the man who grabbed her came back and took the phone away. Then using more rope, he tied her tighter and more secure. He also untied the knotted socks still tied in her mouth and stuffed her mouth again. He then finished gagging her by tying a rag between her teeth. After leaving Kendra to struggle bound and gagged for some time, he returned to her again…