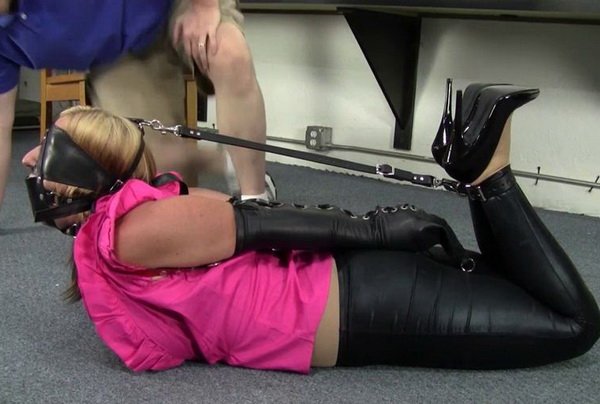 Crystal is standing with Mr Big boss in some shiny leggings and a form fitting secretary top. He quickly gets the office’s ledermeister armbinder ready and slid up her arms. Lacing it tightly her elbows gain on each other before the single glove is anchored off to her shoulders. A blindfold is next with a head harness panel ball gag being fitted tightly over it next. Crystal is then taken to the ground and her high heeled feet are strapped tightly together before she’s rolled over and her gag is clipped back to her ankle straps. Mr Big Boss then takes a seat and watches Ms Frost wiggle and struggle with the occasional bit of hands on inspection of her situation. Eventually he leaves her in the office to struggle a bit on her own and pats her on the butt and informs her of this which garners some extra concerned moans. After a while Mr Big Boss comes back in and has a bit of pity for poor Crystal, undoing her hogtie strap and leaving her in the rest of her bondage to struggle on the floor and put on a show.