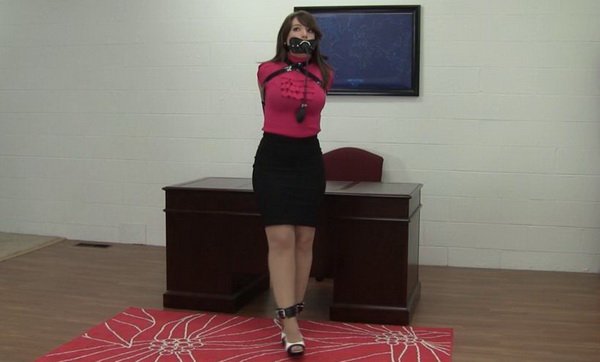 Elizabeth came into Mr Big Boss’s office with a new armbinder from their new leather working department. A shiny black leather armbinder with a zipper on it which he takes from her and quickly pulls up on her arms before zipping it up tightly sealing her arms in. She comments on it’s snugness and then Mr Big Boss runs the strap around her shoulders holding it tightly on her body and securing her arms even further. He grabs a inflatable gag before fondling her a bit and pulling her onto his lap. Inserting the gag he straps it tightly around the back of her head before pumping it up and filling her mouth with expanding rubber. Lizz’s eyes plead around the large gag and Mr Big Boss grabs leather ankle cuffs strapping them tightly around the heels of her shoes and ankles.