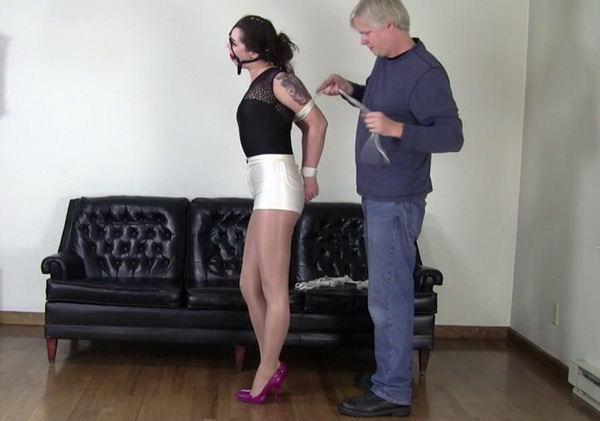 Belle is auditioning to be a dance instructor and the man shes auditioning for has a bit of an unorthodox strategy in auditioning. He first takes a good look at her and asks her to show him what shes got. She does a bit of moving back and forth rhythmically before grabbing some rope and giving her a dancers flexibility test. First he binds her wrists and then after giving another excuse adds a head harness ballgag before moving on and binding her elbows and then having her move around a bit and show off what shes got. Moving her to the ground her ankles are bound and then tied off to her waist. The man has a bit of fun with her before leaving her to struggle on the ground. When he returns he unbinds her elbows and pulls them tightly as she drools from behind her ballgag. Leaving her in the bondage he tells her that part of the test is staying bound and gagged on the floor and she does just that wiggling and moaning in discomfort as she simultaneously hopes that she gets the job.