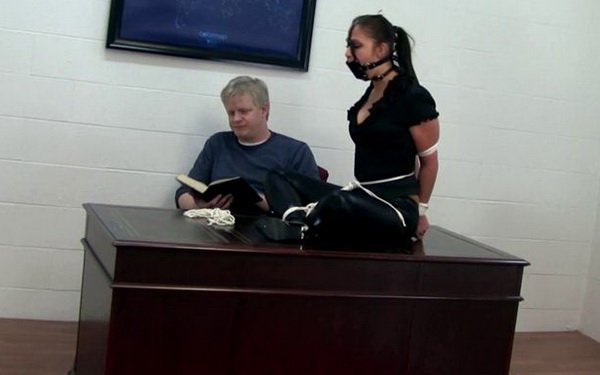 Anna knocks on Mr Big Boss’s office door and comes in to see exactly what it was she was beckoned for. He quickly tells her that he’s got a training manual to review and that he’s called her in there for some visual stimulation while he reviews the material. She’s suspicious of the motives but she loves her job so she goes along with it. Her wrists are bound first and she’s he gets some nice looks at her shiny leggings and tight blouse. He places her next on the desk and grabs another rope telling her to cross her legs lotus style. He takes the rope and laces her legs together holding her in the lotus position. Finally he takes the remaining leg rope and laces it off to her midsection holding her in a nice seated and helpless position. He grabs a head harness panel gag from his desk and Anna eyeballs it with hesitation… Yvette Cousteau ask to be tied up and gag