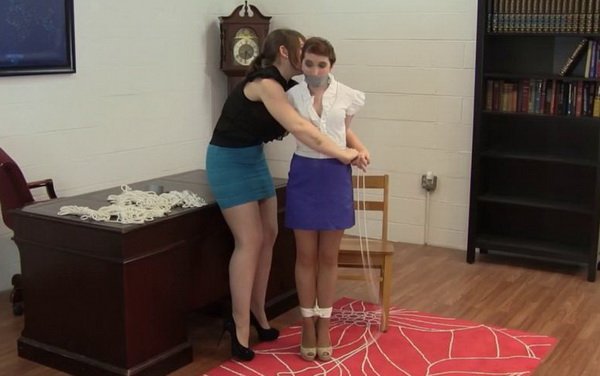 Elizabeth was lounging in Mr Big Boss’s office when Gianna walks in. Lizz quickly grabs her and leads her around to the front of the desk. She informs Gianna that its time for her to get a promotion and she grabs some rope initiating her by binding and gagging her. She quickly binds Gianna’s wrists and elbows as she goes over office rules one by one Gianna happily listening as she’s bound. She moves down to her ankles with another rope and binds her standing before packing her mouth and wrapping her head with silver tape to seal it all in. With the tight gag applied Lizz takes another rope and binds her arms tightly to her body with a body cinch. With that rope applied Lizz takes the opportunity to grope her a bit before moving her down to the floor. Lizz takes a seat beside Gianna’s bound form and watches her struggle a bit. Eventually Lizz has to run take care of some business so she excuses herself. As she heads out she tells Gianna to make sure to struggle well enough to put on a good show. As she lays there excited about her promotion Gianna does her best to make sure she’s putting on the best show she can.