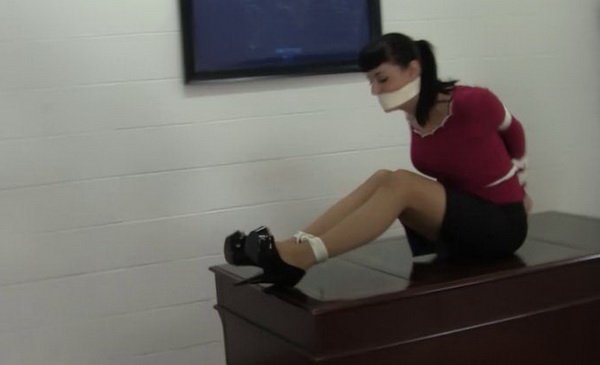 Elizabeth is seated at Mr Big Boss’s desk when Nyxon comes in with a request. She’s come to see if binding and gagging her would help her relax at all. Elizabeth decides that this is a great idea and grabs some rope to bind and gag her with. Turning her around she binds first her wrists and then moves up securing her elbows with more narrow cotton cord. Nyxon’s mouth is then stuffed with a black cloth that she then seals in with white microfoam tape. Pushing her up onto the desk Nyxon finds her ankles being bound next before Elizabeth moves up adding a rope binding Nyxon’s arms to her body.Nyxon is then seated on the desk while Lizz goes back to work. Lizz unbuttons her blouse and enjoys her captive show for a bit before getting engrossed enough in her work that she ends up ignoring poor Nyxon. Eventually she snaps out of it and taunts poor Nyxon a bit before heading out leaving her tightly bound and gagged still on Mr Big Boss’s desk.