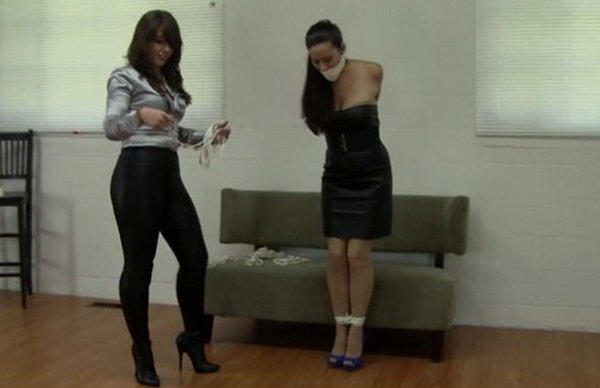 Summer is sitting on the couch in the living room when Lizz enters looking for a specific dress. Lizz enters asking her about the leather dress and immediately realizes where it went when she sees it on Summer. Lizz scolds her about borrowing her clothes and Summer tries to make some excuses. Lizz tells her that she’ll let her wear it if Summer lets Lizz tie her up. Summer reluctantly agrees and Lizz grabs some rope and brings it into the living room. Lizz quickly binds Summer’s arms starting with her elbows and moving down to her wrists. With her arms bound she takes a white cloth and shoves her mouth full with it taking some microfoam tape and winding it tightly around her head. Now that Summer’s arms are bound and she’s gagged Lizz has her sit down on the couch and starts binding her high heeled ankles together. With Summer now completely secured Lizz tells her that Summer’s boyfriend called earlier and said that he wasn’t going to be able to make it. Lizz then decides to cancel her own date and keep her completely bound for the rest of the evening. Another rope forces Summer’s arms against her body and Lizz cinches it off holding her arms tightly against herself. With that rope finished Lizz stands up and lets her know that she is going to head on her date after all and leave her there to struggle. Summer moans disapprovingly through her gag and Lizz heads out leaving a poor, helpless Summer to struggle in the living room…