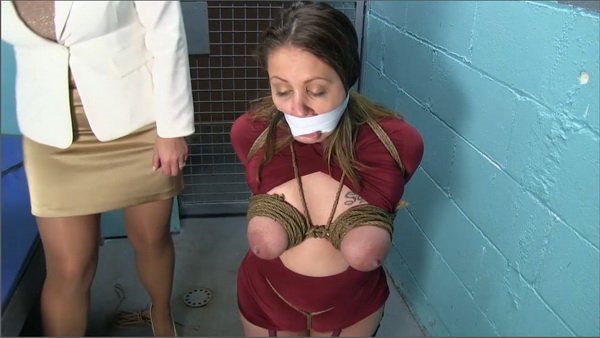 Ariyana is sitting in jail handcuffed. A guard comes in and puts handcuffs on her ankles, a stocking cap on her head and a harness gag on her. Of course this doesn’t make sense to her. He attaches the gag to her ankles and she is stuck crossed leg with her head pulled down. She is left alone and a very angry woman appears. She happens to be a police captain and also a criminal. She has some shady side deals going with Ariyana who just needed to stay out of trouble and didn’t. She wants Ariyana to understand that if she rats her out she will be in huge trouble. So she tortures her a bit with bondage and gags. Ariyana is tied up, her panties are cut off, she gets a tight crotch rope, her boobs are tied up. Her panties are stuffed into her mouth and white tape is wrapped around her head. It pulls her eyes down, twists her nose to the side, and distorts her lips. She is threatened and hogtied and left on that disgusting floor to consider her fate.