Home » Bondage F/F » I tied, kicked her out and she had no business coming back in! 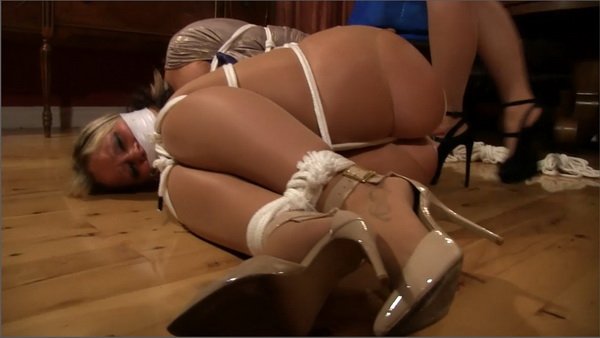 Adara has been kicked out of the place she was living for not paying rent but the homeowner comes home to find the girl texting at her kitchen table. She said she was waiting on a friend to help her move the bed, but she was all dressed up and had no right to be in the home. A scuffle ensues. The homeowner who is into bondage gets mad and gets some rope and ties her up. Meanwhile Adara tells her that she is going to hell for being into bondage, the homeowner tells her that she is going to hell for not paying her bills. Anyway the girl gets tied up rather roughly. A big hanky is stuffed in her mouth and her head is wrapped with bright white tape. She struggles hopelessly on the floor, but the home owner isn’t done yet. She ties her into a little ball, beats her butt, rolls her around. Then she leaves. Eventually Adara’s friend came. He halfway unties her, helps her to her feet and slides her to the front door to get Adara out of there.