Home » Bondage F/F » She begged me not to tie up her boobs, I did anyway. 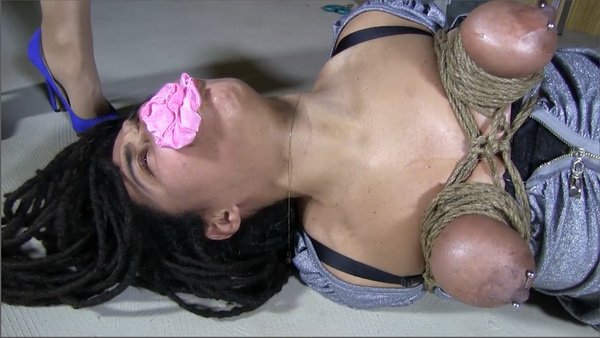 Je C is back and I promised her this time that we would do a clip that wasn’t a damsel clip so she could space out a little bit. The fun starts immediately. She gets her arms tied, she gets lots of ropes on her legs, she has been ballgagged and she drools on my head so I take tight microfoam and wrap it around her head. I know the drool is building up in there..I put lots of clothes pins on her nipples. She grumbles about it a lot. I add lots of arm ropes, elbows tied tightly and I run them all the way down her hands. When I remove the microfoam drool comes out like a waterfall. It has a lot of elasticity too and it hangs from her dress for a long time! It is UNREAL. It might have magical healing powers. I take the drool and smear it all over her pretty face- nose, eyes, cheeks and tits Lazy assistant punished tied up with ropes and gags