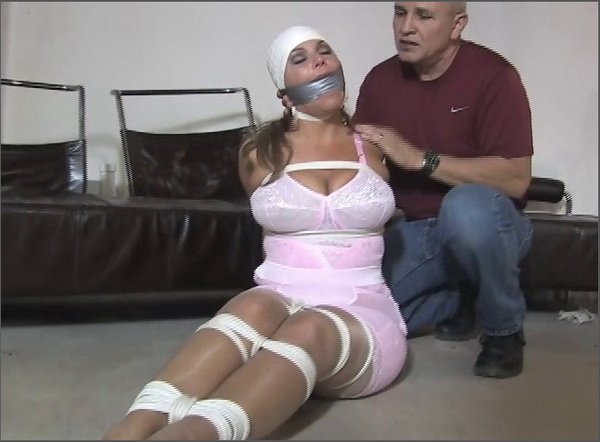 When he heard a noise in his basement, he went downstairs and found his girlfriend JJ Plush there in just her bra, girdle and a rubber bathing cap. Knowing his wife was do home any minute, he tried to get his full figured girlfriend to leave. But she wanted to play and demanded that he tie her up in the outfit she was wearing. She told him that if he didn’t she would run upstairs and tell his wife all about their affair. With no other choice, he brought out some rope and started tying JJ up. When he heard his wife walk in up, he told her not to make any noise. But JJ told him that if he wanted to keep her quiet, he better gag her really good. Once he had JJ all tied up, it was time to gag her. But just as he started stuffing a huge wad of panties in her mouth, his wife called him from upstairs. Holding the panties in JJ’s mouth, he yelled back at his wife that he would up after he finished tying up some loose ends. He then wrapped tape tightly around JJ’s face and over her mouth to finish gagging her. JJ was then left alone bound and gagged in the basement. She moaned through the gag as she squirmed around on the floor. There was nothing she liked better than the feeling of being totally helpless. She knew that in a short while, things were only going to get better when her boyfriend returned and figured out how to peel her out of her bra and girdle.