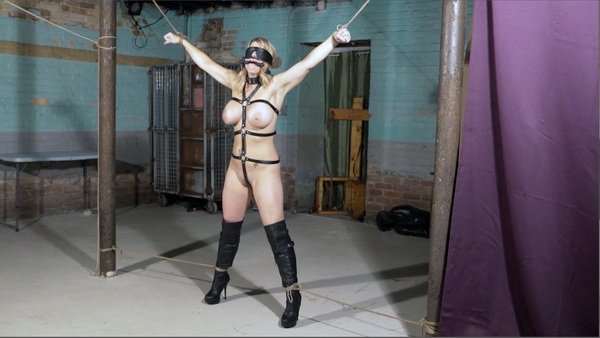 Carissa Montgomery is a private investigator and heard that a woman has been abducting girls, training them as pony girls and selling them off to wealth men. She decided to do some investigating of her own. She is in the criminals home. She sees pony gear on the table and then looks at her laptop and sees an image of one of the missing girls in heavy bondage. As she picks up the phone to call for back up her pretty face is met with a smelly rag, she is soon out. When she comes to she is forced to strip and pose for some images to be sent off to potential buyers. Then she is told to remove her panties and stuff them in her mouth and tape it closed with many wraps around the head. She is all taped up on her soft bare skin and left to struggle while the woman goes off to find a buyer for the beautiful buxom blonde. When she returns she is put back to sleep.
The scene cuts to the detective in a leather body harness and boots. She has been tied spread eagle between two posts. She is groped, teased and taunted with a crop before her adventure continues. She is forced to walk leashed and ballgagged with good posture while strapped up back and forth throughout the basement. Then it is her turn for the strappon which the sexy blonde can’ t help but enjoy, reverse cowboy on the steps, then from behind then missionary. She is denied an orgasm and left writhing around. Next she is shown on her knees strapped and roped up. Her mouth is stuffed with the smelly rag, her head wrapped with tape. She moans in despair not knowing what her fate will be- although the pony girl trainer has assured her that her new owner will be disgustingly large ad ugly.. Simone Coed tricked into the pony girl trainers house with the promise of a legit acting audition, it continues. girl girl bondage

Rachel Adams mummification bondage, I know how to warm you up