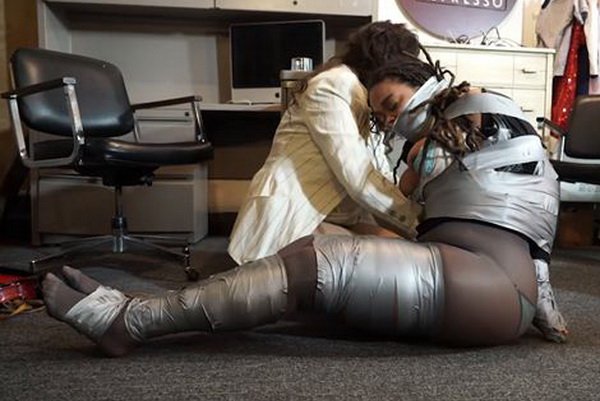 Je C was fired from her job for wandering in late, being rude, doing things all wrong. She is pissed and on some kind of drug binge. She decides she is going to take revenge on her previous employer. She plans to tie her up and rob her safe and take whatever else she can. She barges into the room yielding a weapon. She starts telling the boss lady how terrible of a boss she was. She ties her up and stuffs her mouth, gags her with her scarf and then some tape to hold it in place. She ties the womans wrists to her ankles, takes her expensive handbag and heads towards the safe. She forgets the gun and her bag of trips… Rachel Adams tape bondage – Fed up with the absentminded coworker

Being very lazy on the job Terra Mizu got her into a tight spot. Girl girl bondage clip

Blonde Tabitha stiffed the bartender but didn’t get away with it. DID HD video 2015

Sarah Hogtaped, I coulda choked on the gag but my dad didn’t care.