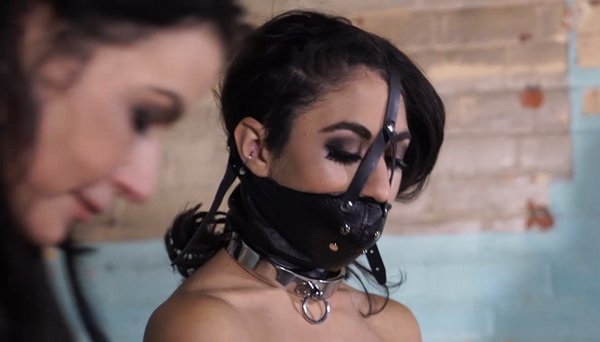 It is almost time for Simone to be sold off to the woman that has purchased her. JJ is ready to say good bye when she has Simone strip from her dress and scarf & pose for some photos in lingerie. Then she is tied spread to a chair with a big redballgag. After some struggling her bra and garter belt are removed and she struggles more. It has occurred to JJ that Simone is worth a lot more than the price she is going to get from this new buyer- so she decides to send some photos off to the gross man that bought Caroline. He had basically destroyed her anyway. While the bidding ware ensues Simone gets some training..After the chair scene she appears chained to the wall by a thick metal chain. She has been blindfolded and she is wearing a bit gag and a tight leather armbinder. She waits patiently to see what will happen. Her blindfold is removed. Nipple clamps are applied and she is detached from the wall and told to keep her posture straight and march in place. Then she has to walk that way leashed, and finally she is told to trott making her boobs bounce and her heels sound like little hooves on the ground. She is attached to the ceiling by the rope leash connected to her metal collar and told to keep trotting while JJ goes to look at how the bidding war is going over itty bitty sexy coed Simone. Next she appears stripped just to her undies. She is gagged with the scarf she was wearing in the beginning and she is gagged with a leather muzzle gag. She changes her nipple clamps, gets to the floor which is now covered in a fuzzy rug and is tied spread eagle- so vulnerable.Eventually a crotch rope is added and tied off above and little Simone must wait to see who she will be sold off to- the lesbian or the old fat guy that already ruined one of his girls- or perhaps even someone else is bidding for this sweet little pony? Coed tricked into the pony girl Simone trainers place with the promise of a legit acting audition. leather bondage

Enchantress Sahrye, ungrateful cheating housewife gets what she deserves

Mary Jane and Mz Berlin wmbcv-0273 – Reading Between the Lines