Home » Bondage F/F » Rachel Adams mummification bondage, I know how to warm you up 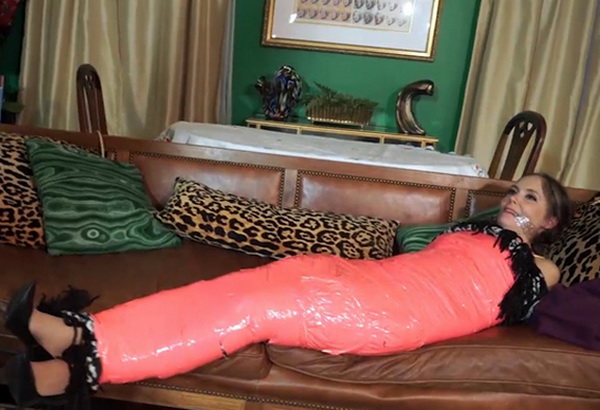 Rachel is always cold and complaining. Her roommate JJ has an idea for her to warm up, encasing her in a fuzzy blanket and taping her up! She gets a cleave gag also and then balled up tape stuffed in her mouth and a nylon hood with tape around it. Once she is all taped up she realizes that JJ has no intention of letting her out. She struggles hard to get free. Eventually JJs boyfriend comes in and sees Rachel. He knows she must have been complaining about being cold again. He gropes at her a bit and sits her up in front of the couch and he leaves. Eventually she is able to wriggle her way out and remove the gag, angry that she was left that way. Ariyana taped, She saw too much

Riley Rose in a makeshift jail cell, they left her hogtied, contemplating her fate

Blindfolded Caroline Pierce tied to a chair, It took me a long time to find you again