Home » Bondage M/F » She almost got away with it, but she ended up being robbed too 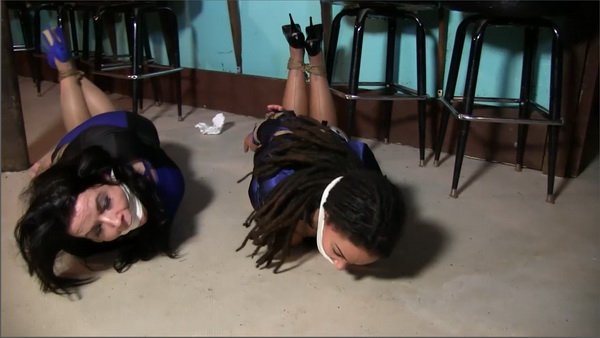 It is almost Christmas and a woman is desperate for money. She decides to rob a girl working at a dive bar with no cameras. Things are going well, the girl is gagged and restrained. The robber takes her purse, rings, money behind the bar and some money in her bra when a man comes in and sees what is happening. The robber tries to convince him that the pair are lovers playing a game but he sees the gun, grabs it and turns the tables. He ties up the other woman. He makes them both get on the floor. He gags the robber and hogties both girls, adds more to their gags and then takes off with the purse and a bunch of booze from the bar leaving them both bound and gagged on the floor. He taped us up and tied up stuffed out mouths with panties to shut us up.

JJ was left gagged and hogtied in the private office