Home » Bondage M/F » He taped us up and tied up stuffed out mouths with panties to shut us up. 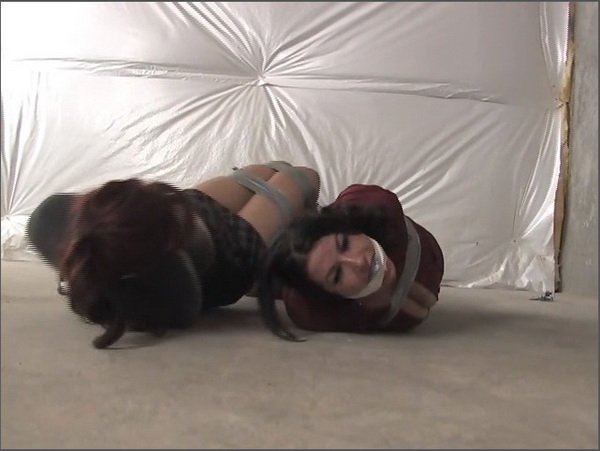 JJ and Kimberly Marvel have been taken to an abandoned basement. They are forced to sit there and wait for the man to return. When he does return, he is holding a roll of duct tape. One by one, he tapes up both girls He then makes them to lie face down on the ground where he stuffs panties in both of their mouths He then ties rags in their mouths to gag them. The girls struggle on the floor trying to get each other loose. They try to talk to each other through the gags, but find it impossible to understand each other. Later the bad guy comes back and decides he is going to have some fun with themls. First he pulls Kimberly’s skirt off and then cuts her sweater open so he can fondle her boobs. He then pulls JJ’s boobs out too. He decides he is going to take Kimberly first. But before he drags her away, he has to secure JJ better. He covers her face and head with a pair of pantyhose and then wraps duct tape around her face. He then connects her feet to her face, putting JJ in a strict hogtie(Hogtape). JJ is then forced to lay there and watch as the man pulls Kimberly’s panties down.