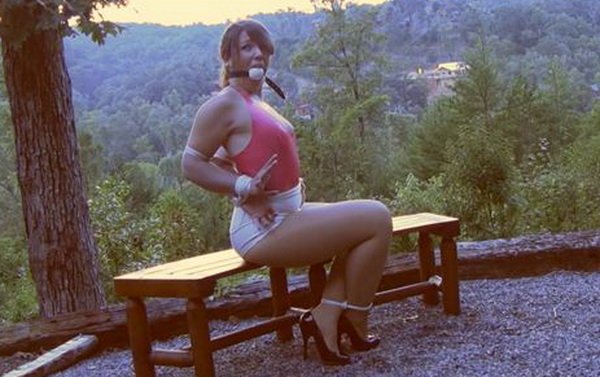 Lizz is approached and roughly handled by David who’s decided it was time for some bondage fun on their trip to the mountains. He quickly binds Lizz’s wrists and elbows before shoving a large white ballgag into her mouth. Lizz pleads with him to not tie her up now but he doesn’t listen and she finds herself complaining through a large ballgag before she decides to mess with him a bit by going and hiding on the property. Finding that the door is open Lizz opens it and wanders around the deck and down the side of the house to the firepit down at the bottom of the hill. Lizz slows down a lot when she gets to the stepping stones leading to the firepit but she’s a sure footed high heel walker and makes it down there just in time to find a seat and get caught by David who’s followed her out and down. He quickly lashes her ankles together and leaves her struggling in her bondage in the great outdoors.