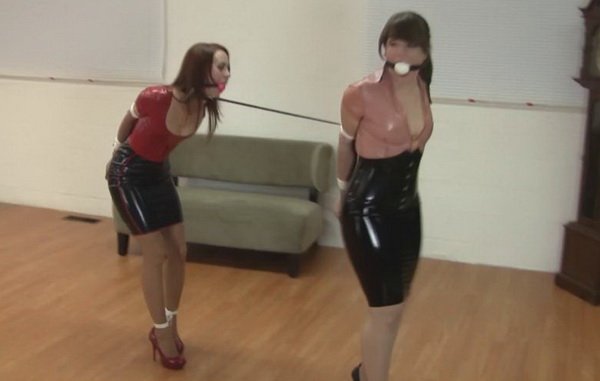 Madalynn and Elizabeth are patiently waiting on Mr Big Boss in his office wearing some really nice latex outfits. Mr Big Boss enters and gets quickly to work binding Madalynn’s elbows first before moving onto her wrists. Elizabeth grabs a collar and places it on Madalynn’s neck buckling it on while Mr Big Boss patiently waits on her to finish so her arms can join Madalynn’s in tight bondage. With both women’s arms bound Mr Big Boss grabs a pink ballgag buckling it on Madalynn and then taking another ball gag this time in white and shoving it into her mouth and buckling it. Madalynn is then treated to a hobble rope around her ankles and the leash’s use becomes apparent as it is then tied off to Elizabeth’s elbow ropes. Elizabeth gets immediately to leading Madalynn around the office until she gets a bit sassy and starts trying to pull back. Madalynn is hobbled but Elizabeth is handicapped a bit by her six inch heels. They play all manner of games heading back and forth across the floor with their heels clicking on the wood floor. Eventually after a bit of playful back and forth fun they both sit down on the desk where a very out of breath Madalynn proclaims from around the ballgag “That’s a lot of work!”