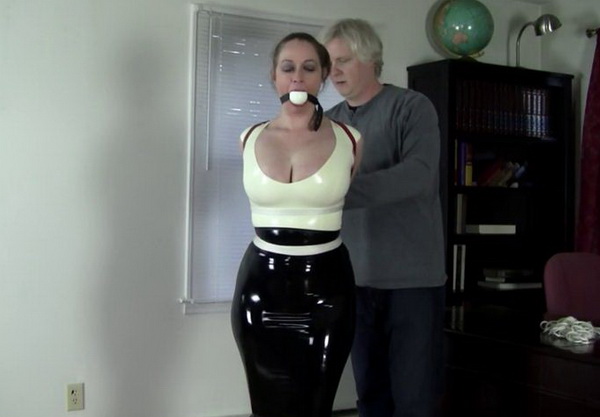 Pepper and Mr Big Boss are primed and ready for some latex and bondage play. Pepper struts her stuff in a tight white latex top and black latex mermaid skirt. Shes put immediately into the ledermeister single glove armbinder which after being laced and yoked hold her arms together tightly. A large white ballgag is added and then her arms are laced to her body with rope cinching them tightly to her torso. After a harness is added Pepper is moved to the floor where her ankles are bound and then her legs tightly frogtied. With a couple more ropes Pepper is first hogtied then her hair pulled back into her hogtie. Pepper struggles and eventually gets some slack in her hair ropes but the rest of the bondage remains as tight as a drum. [OfficePerils] Someone Made Other Plans [Pepper Sterling, Predicament Bondage]