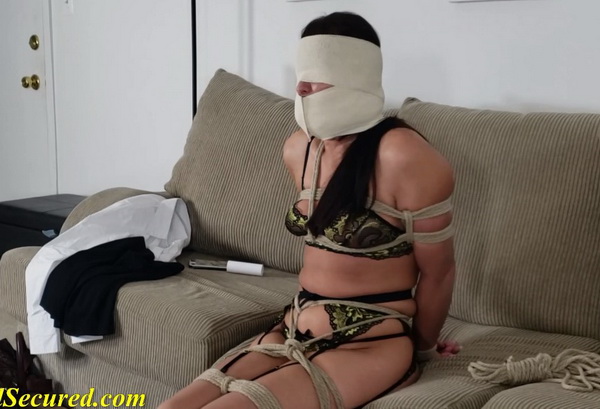 Lil Mizz Unique had been working on the story of a lifetime, and was set to blow the lid off a big organized crime ring terrorizing her city. Of course she had underestimated the lengths to which the crime body would go to squelch the story. As she prepared for a relaxing night at home by stripping down to her very sexy lingerie, she was surprised by two of the crime lord’s henchmen! They carried the struggling journalist into the room, binding her tightly and gagging her with mouth packing, a tight cleave gag and a cloth over the mouth gag! Her efforts to call for help completely stymied, she could do nothing but writhe and grunt helplessly as the pair bound her very tightly and very inescapably! Left alone, she tested her bonds for any sign of slack, squirming, thrashing and twisting and turning every way possible. She made no progress in her efforts to free herself, but she did provide the pair of bad guys with some delightful views of her sexy body as it thrashed impotently! She finally managed to get to her feet and hop to the front door only to be caught again just before she could make her escape! Now the time had come for her to vanish, so the pair decided to make her gag even more diabolical by wrapping her face in vet wrap, sealing the already applied layers below while simultaneously driving the packing and cloth even deeper into her lovely mouth! Another layer of cloth followed by a layer of duct tape and finally a tight wrapping of medical bandage over her mouth and eyes left her silenced and sightless, ensuring she would not be making any more escape attempts. Mewling in misery, she squirmed helplessly until the two men lifted her bound body and carried her from her home, never to be seen again! 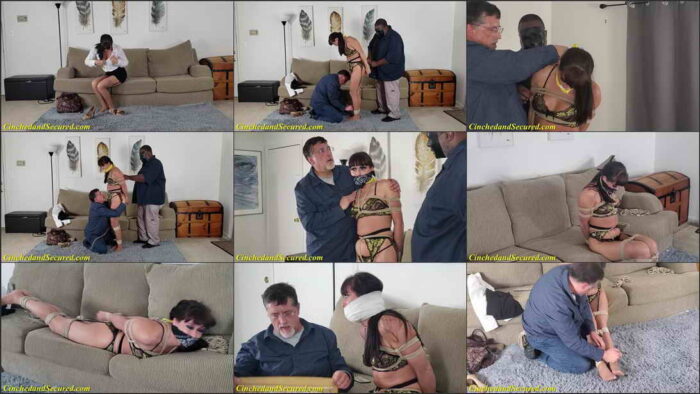