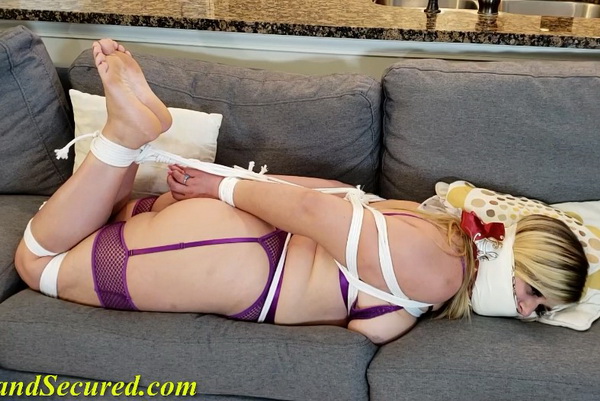 Kendra is one of the best in the “elimination” game, so when a mob boss needed a troublesome witness to disappear, he did not hesitate to reach out to her to make it happen. Her plan: Pick up the clueless dude in a bar, load him with drinks, bring him back to “her place” with the promise of hot sex, and then overpower him, and leave him alone to be blown to bits by a powerful time bomb. Unfortunately, once they were back at her lair, the man overheard her phone call with the mob boss. Playing along, he surprised Kendra by clamping a rag tightly over her face, and as she fought, her lungs filled with the fumes from the strange ;liquid that soaked the rag. Soon, she was slumped and senseless on the sofa. When her mind cleared, she found herself tightly bound! Realizing her predicament, she fought to free herself, but her efforts were fruitless. Her potential victim returned, and crammed a huge amount of cloth into her yammering mouth hole, then sealed her mouth shut with a tightly knotted rag, followed by an entire roll of medical bandage, and several turns of tape for good measure! Knowing she was in great danger, she tried to scream for help, but the massive gag snuffed out all noise, leaving only soft, pitiful muffled groans and screams! She fought like hell to get loose, finally getting to her feet and hopping through the house into the kitchen where she searched for something to cut the ropes. Unfortunately, she was grabbed from behind by her potential victim and dragged back to the couch. The man pulled her big tits out of her bra, fondling her roughly and enjoying her pitiful protests. Finally, he added even more layers to her already stifling gag, including a tightly wrapped piece of cloth, red electrical tape, and finally finishing it off with micro foam tape! Now utterly silenced, she could only fight feebly as he hogtied her tightly and left her with her final surprise: The very same bomb she had intended to use on him! Terrified, she squirmed and thrashed to the very limited extent that her bonds would allow as she watched the seconds remaining in her life slowly tick away! 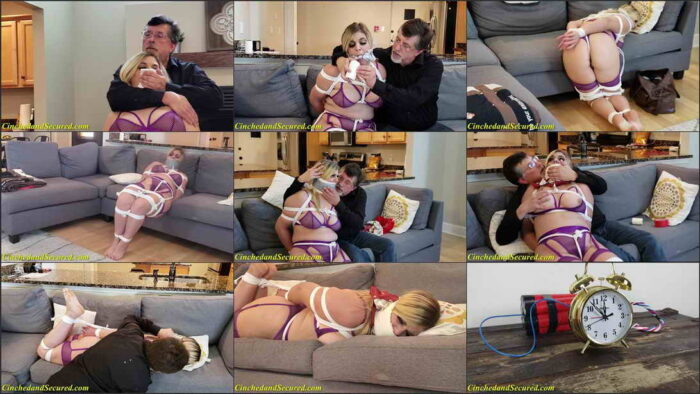 Bound Bailey Paige and the Foot Freak, Cinched and Secured