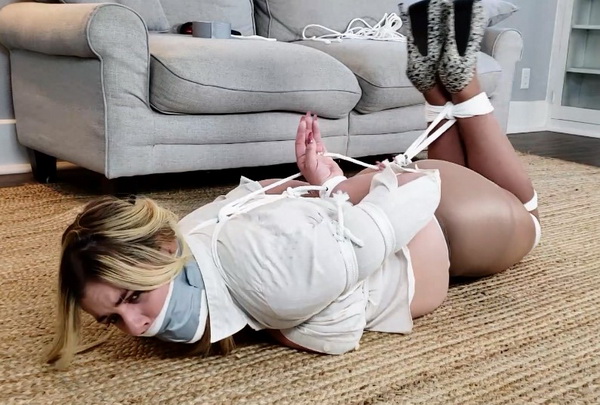 Kendra would do nearly anything for her friends, especially if it would further the cause of true love! So, when her friend reveals he has a kinky girlfriend who likes to be tied up and that he needs someone to practice on, she eagerly volunteers! Turns out her friend is a VERY fast learner, and before she knows it, she’s VERY tightly bound with a big ball stuffed in her mouth. She grows concerned when he informs her that his girlfriend likes spending hours and hours bound, so Kendra will be doing the same whether she likes it or not! Squirming, protesting and thrashing like mad, she tries to loosen the ropes, but it is a useless pursuit. All she can do is slowly sink to the floor, rolling about in a frantic bid for freedom. Freedom is the last thing her friend wants, however, and he returns to show her just how good he is at silencing a girl, stuffing her mouth, wrapping her face with bandage and then securing it all with VERY tight wraps of tape! He pulls out her tits and yanks down her skirt for good measure, finally hog-tying his fettered friend and leaving her to struggle, her bare boobs scraping painfully against the rug! 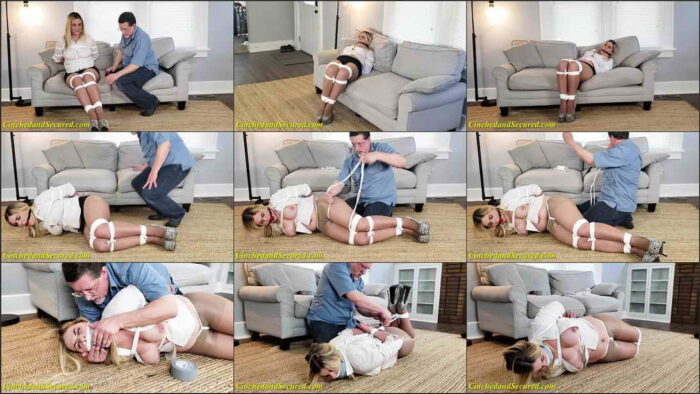