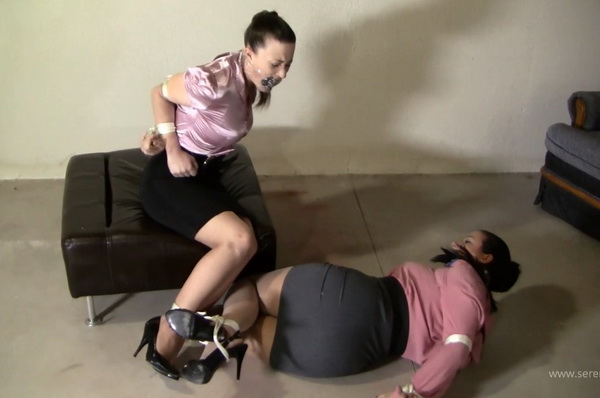 Mr. Andrews brought Ms. Plush downstairs to the storage area to inquire about a few discrepancies he found in the books. She stands with her arms crossed annoyed that has to even be involved in this nonsense. David grabs her arms and pulls them behind her back and starts binding them in place at the wrists and elbows. JJ tries to blame Elane or Serene or pretty much anyone other than herself at this point.
JJ isn’t willing to give Mr. Andrews any information about the books and actually accuses him of being a pervert that just wants to tie up girls. He pulls out a bandana and stuffs the huge square of cloth in her mouth. Next, he winds clear tape around her head to keep the gag in place. If she isn’t going to say anything helpful, she doesn’t need to speak at all right? He makes the gag so tight that it causes her cheeks to puff out over the tape.
JJ tries to run away but Mr. Andrews grabs her and pulls her back her to have a seat on the ottoman. He ties legs, crossed at the ankles to make sure that doesn’t happen again, he even ties her high heels on to make any escape a little more difficult. David decides to go grab me since I’ve been accused of stealing the money. He leaves JJ downstairs to struggle in the ropes. She slides off the ottoman and wiggles around on the floor pulling against the ropes… 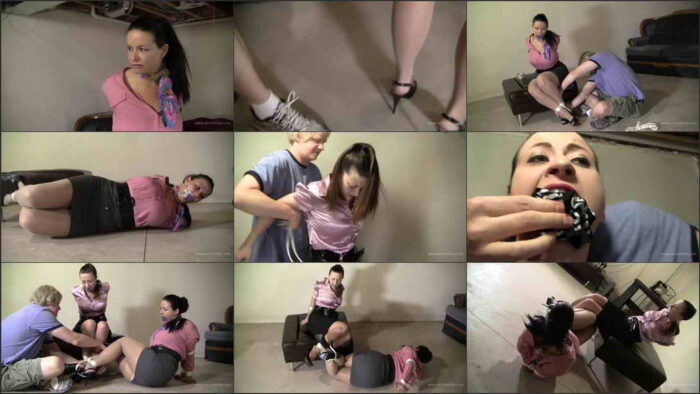