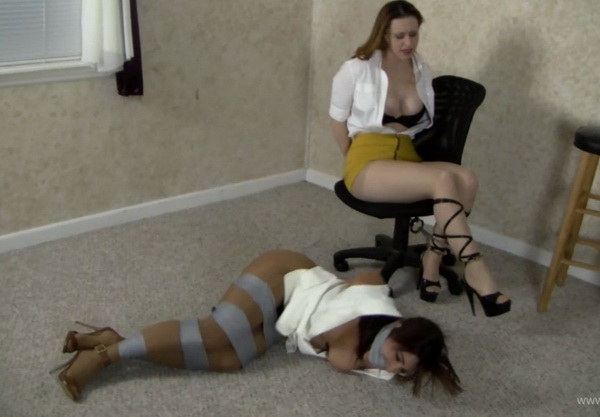 Sahrye is checking out her makeup in a mirror when she’s grabbed from behind and lifted into the air. When the scene fades back in Sahrye is bound tightly with tape and â€œrestingâ€ on a chair. She gradually becomes aware of her surroundings again and finds herself looking at Serene seated on a stool in a tight skirt and very strappy high heels. Serene lets her know that she’ll be home soon enough and just find as long as her husband pays the ransom. Sahrye doesn’t really calm down at this information though and Serene tells her to quiet down as she grabs her boob squeezing hard. Sahrye is eventually ungagged and tells Serene that they are too poor to pay the ransom and that she needs to work something else out. Serene takes pity on her and unbuttons her shirt kissing on her neck before Sahrye while still tightly bound reciprocates. Serene takes Sahrye’s nipples out of her bra and begins to carress them with her tongue while Sahrye moans in pleasure. The man comes in and catches them and irritated at Serene’s selling out of his plan cuffs her and sits her down on a chair attaching her ankle cuffs to it before regagging Sahrye with a black ballgag and wrapping tape around her head on top of it. He takes her boobs out and squeezes them a bit before coming back in and announcing that it’s bed time. Turning out the lights to their screams before leaving them till the next day. 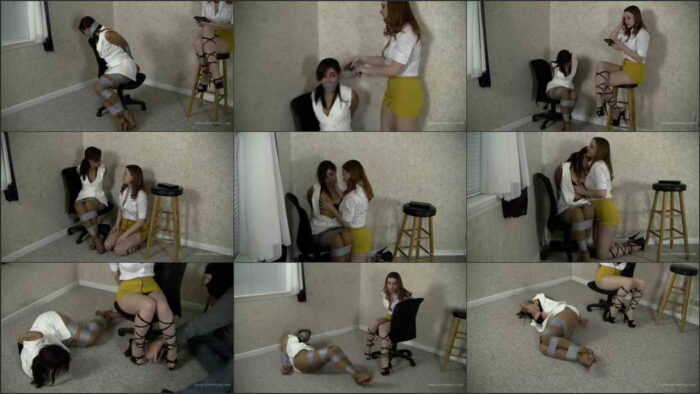 Carissa Montgomery and Serene Isley – Punished in a Towel, sereneisley