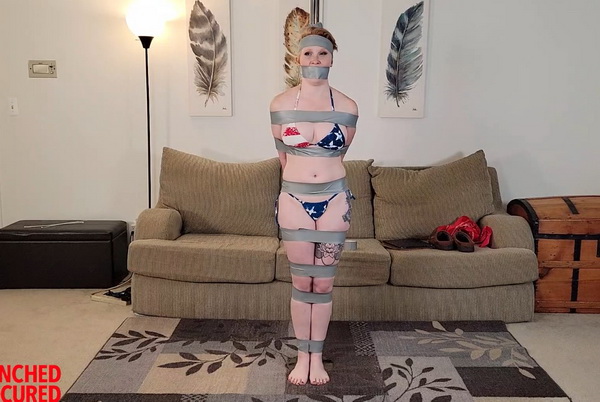 Izzebella has a gambling problem. Actually, her boyfriend is the gambler, but it’s very much Izzebella’s problem!Since her boyfriend is delinquent and owes his bookies a lot of money, they’ve decided the best way to track him down is to enlist Izzebella’s “help”! Commanded to strip to her bra and panties by the head goon, Izzebella angrily complies, assuming that a few pictures are all the man wants. She’s half right! He wants pictures: of her bound and gagged in a most uncomfortable chair tie! All the better to convince boyfriend to pay up! Furious, she thrashed and struggles in her bondage, but she remains firmly welded to the chair, her gag talk evoking no sympathy from the goon. Her struggles, DO manage to drive the crotch rope deeply into her panties, cleaving her sex deeply and uncomfortably! Months later, when the debt has been paid, Izzebella has thrown out her bum of a boyfriend and trying her best to forget about her ordeal with a day at the beach. Her plans are interrupted by a return visit from the goon, who quickly tapes her to a pole in her bikini! Her pale flesh is in agony from the tape, her mouth is packed and taped shut, and her head is even anchored to the pole, all to convince her ‘boyfriend” to pay up again! Izzebella tries to tell the goon that she split with the loser, but the gag is too effective! It’s too bad they are split up, though. If they were still together, her boyfriend may have thought twice about exchanging Izzebella to the syndicate for a substantial line of credit!
This video also contains behind the scenes footage of Izzebella releasing herself from the tape bondage. See just how sticky and uncomfortable tape is on the skin of a pale redhead! 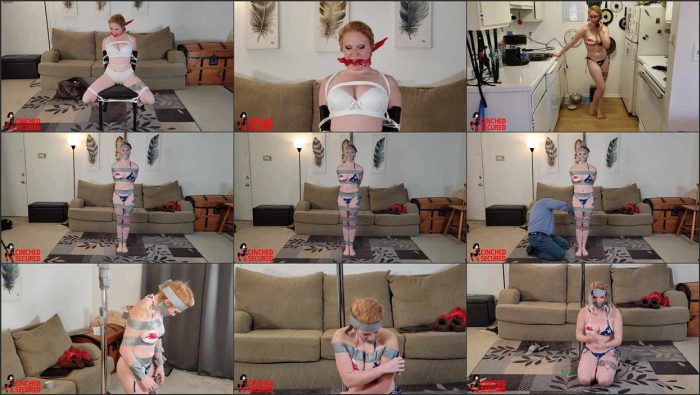 Simone – The Ties That Bind! Cinched and Secured

Autumn Dais – 2 Bad Guys Are Meaner Than One, Cinched and Secured