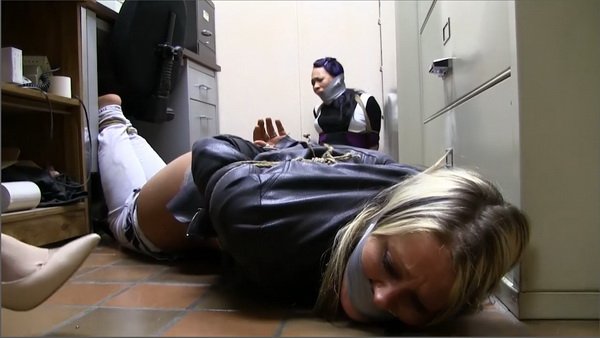 Sass and JJ were in business together but Sass moved on and left JJ in the dust, but JJ has been plotting revenge and her old partner is tied up with a big ballgag in a back office. JJ knows where a lot of money is and her nice car that will go straight to a chop shop. She has her fake passport and she will be getting out of town in the morning. All is going as planned and Sass is securely tied but someone comes in and starts asking if anyone is around. It is a delivery girl. JJ heard her and hid and when she came around the corner grabbed her and started to tie her up. She got a ballgag too. He pants were pulled down for humiliation and she was wearing pantyhose. JJ adds more rope to the poor ladies and then takes off to get some money and whatever else she can find. When she returns the two girls are sitting next to each other trying to untie one another knots, but JJ intervenes and removes the big ball from her old friends mouth and stuffs in a pair of blue panties, a pair of thongs and an entire bandana before wrapping her head with duct tape. She then tightly hogties her and moves on the the blond delivery girl. Her mouth is stuffed and tape is wrapped around her head and she is hogtied. JJ then leaves them there struggling on the floor and leaves to get on with her new life far away. Hopefully someone comes in early to let them go.. You may be cute & young but you will pay for ripping me off. Simone bondage