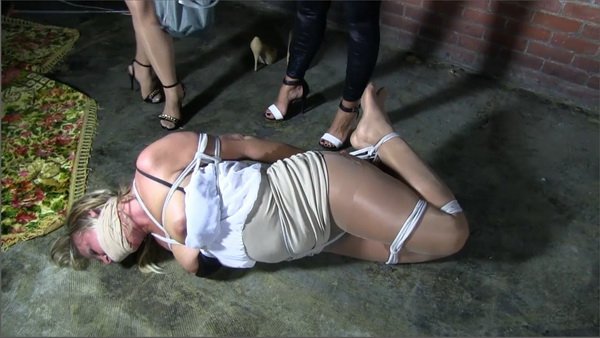 Sahrye and JJ bring have a woman they thought was their partner in crime tied at the wrists. Sahrye talks shit while JJ ties her up. The woman denies he accusations and seems to be be fluttering between delight and disgust at the current situation. She basically just laughs at the women as she continues to deny everything. Her mouth is stuffed with panties and her head wrapped with vetwrap tightly. She is told to get to her knees and left there for a bit before the two come back and add more rope and mess with her. They take off again and leave her before returning to manhandle her a bit more and put her into a hogtie to leave her there for the night. You may be cute & young but you will pay for ripping me off. Simone bondage

[gndbondage] When I get untied, I am going to kick your assmmmpph! [Goldie, female bondage]