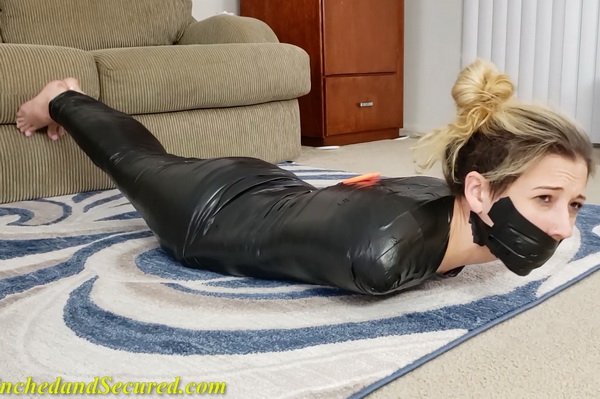 Garnet had never been mummified before, and after this, she may never want to be mummified again! We started things off with a brutally tight tape wrapping, compressing her tiny body far worse than any bondage she had ever been in. We wanted to give her an extra incentive to struggle for freedom, so before we packed and sealed her mouth, we tickled her extremely sensitive toes! She goes ballistic each time my fingers touch her sensitive, squirming, soles and she begins the fight for freedom! We want her to have a LITTLE hope, so I left the scissors nearby: laying on the sofa! She soon realizes that sitting up is nearly impossible, and she struggles like almost no one I’ve ever seen in an effort to get a hold of them. Of course, with her hands glued to her sides, completely encased in her black cocoon, she doesn’t have much opportunity to grab them, especially when her struggles are interrupted with periodic tickle torture! Garnet is VERY flexible, however, and she gave us quite a surprise when she managed to contort her body and grab them with her feet! I can’t allow that, so it’s time for more tickling and then I add the ultimate frustration: I tape the scissors into the small of her back! There’s no possible way for her to get them now, as her frustrated, despairing grunts and groans demonstrate! Guess she’ll be mine for a long, long time! 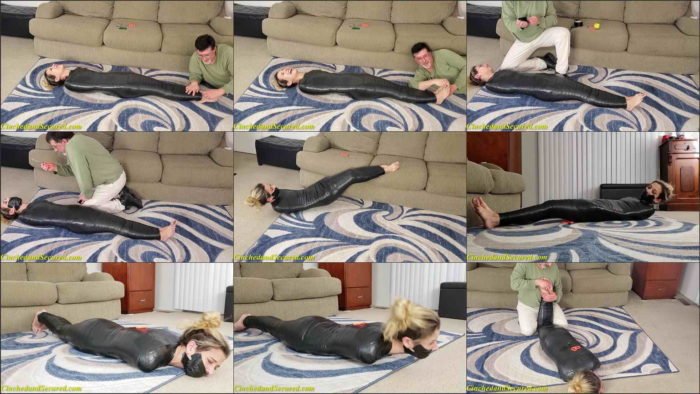