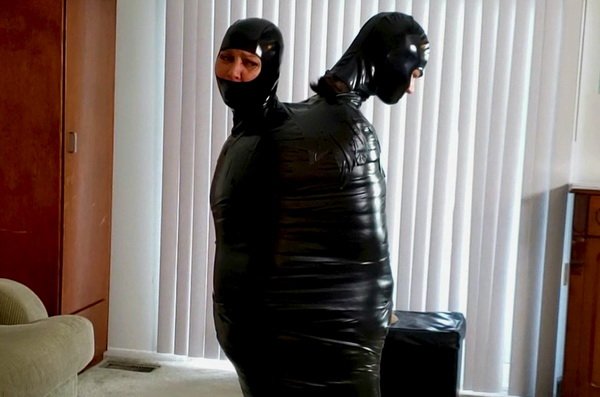 Genevieve and Jeanette are back! Back to back, that is! When Genevieve was captured by a burglar in her bedroom, she was helpless to keep from being wrapped up tightly in a blanket and taped up to within an inch of her life!When she tried to scare off the burglar by warning him that her daughter would be home soon, the burglar opened the closet to reveal her daughter Jeanette, already wrapped and gagged in a tight little package, with only her head and large, scrunchy socks sticking out! Genevieve opened her mouth in surprise, only to realize her mistake when the crazy man stuffed her mouth to bursting with an old dirty sock and taped it tightly in place! Tossed on the bed, Genevieve could only struggle, her muffled voice joining that of her daughter who struggled in her own prison! The pair thrashed about as best they could but there was no escaping their thick, sticky cocoons! The pair fought like mad, but they could not prevent being hooded and wrapped back to back and left standing in their living room! The girls could barely wiggle their compressed bodies, their cries almost inaudible due to the mouth packing and hoods! 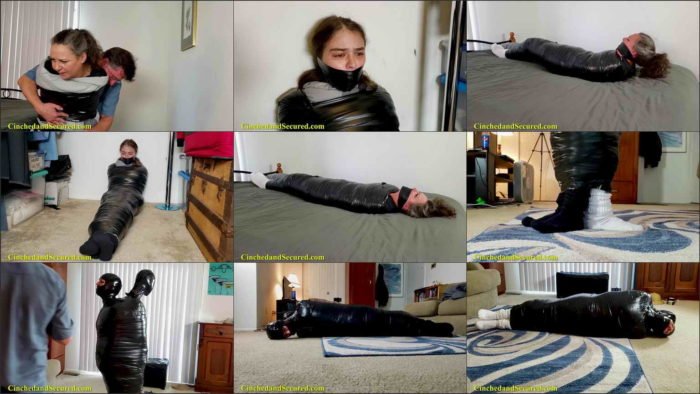 Genevieve Taped to a Pole, Won’t Drool Over Our Daughter’s Friends Anymore