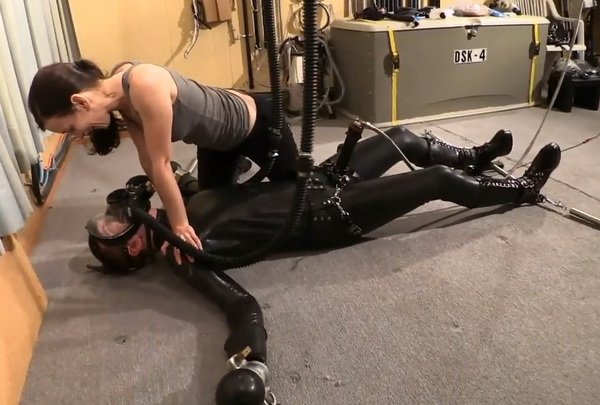 Soon after arriving to the legendary JG Leather’s play space, Elise, JG and Serious Bondage Mark rig an intense scene for the formidable Dart Tech. First, Dart Tech is dressed fully in a latex catsuit, tall leather boots and a gas mask attached to two bubbler bottles, restricting his breath. Next, rubber mitts and metal shackles are attached to his wrists, which then are pulled out wide by heavy garage door springs, resulting in a small degree of freedom – more perceived freedom than actual freedom of movement. Dart’s ankles get the same spring treatment, as he is stretched wide on the floor. Adding to his helplessness, Elise straps a hip harness complete with an electro cock sheath fueled by an actual milking machine! This is like catnip for Elise, who becomes more excited as her control over Dart increases. Gradually, the electro is fine-tuned to perfection, demonstrated by Dart’s multiple hands-free orgasms stemming from both e-stim and suction. Dart’s body convulses as Elise squeals with glee for what she has created. Of course, creating complex bondage scenarios such as this is possible due to the will and desire of a team of people, to which much appreciation is given. No Dart Techs were harmed in the making of this video – he eventually came back to life 🙂 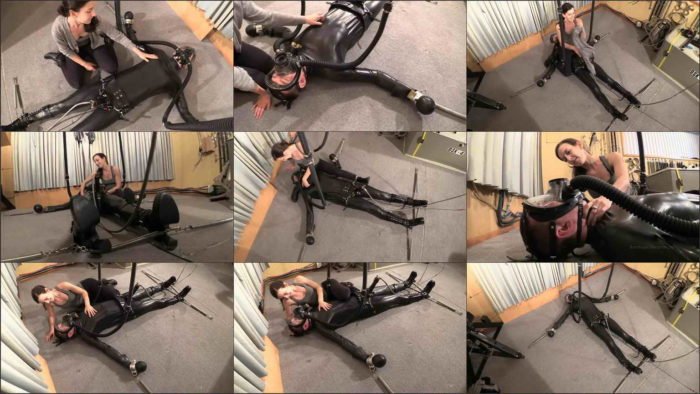