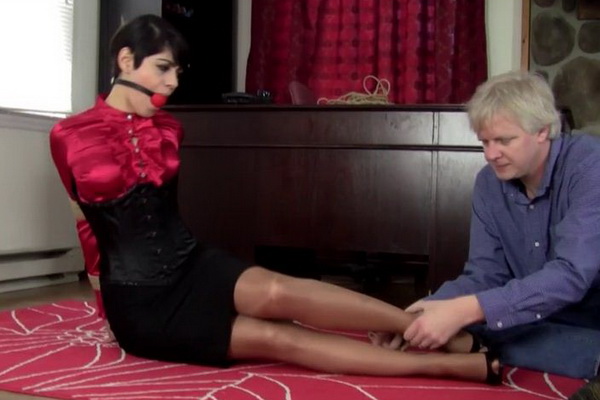 Johannie walks into Mr Big Bosss office apologizing for being late but really making up for it dressed in a red satin blouse, waist cincher, pencil skirt, and heels. He breaks out some jute rope and after getting some of it untangled comes out and maneuvers Johannies arms behind her back. Binding her wrists first he then moves up to her elbows as she asks him not to leave her to go out to lunch again. He half heartedly promises not to before continuing to bind her. A red ballgag silences her complaints as its buckled in tightly and then Johannie is moved to the ground where her ankles are then bound. Shes then left to struggle and drool all over herself for a bit while Mr Big Boss goes to check on things around the office. Eventually he returns just long enough to get a couple of gropes in and hogtie her before heading out to lunch and breaking his promise to Johannie.
Similar video – Bondage model Jj Plush. Mia Vallis Rope Bondage and Gagged By The Fireplace

|OfficePerils| Johannie Hogtied, Ballgagged : Back In The Office With A Bang