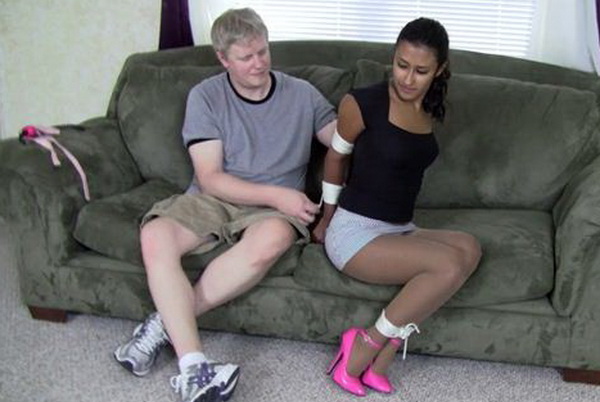 Drea Morgan was waiting on Mr. Big Boss in one of the office lounges. She wore a short tight skirt, black top, and hot pink pumps with ankle straps. The Boss arrived with his briefcase full of rope and filled Drea in on her challenge. Drea knew she would do a good job on the task since she fancied herself an accomplished escapee. What Drea didn’t know, was that the Boss was going to make it a bit more difficult for her.Mr. Big Boss tied her ankles together first and then worked his way up her body. Once her elbows and wrists were tightly secured, he gagged her with a pink ball gag. To Drea’s surprise, he also added a pink leather blindfold. The Boss picked her up off the couch and laid her on the ground. He placed her into a tight hogtie before lifting up her shirt to reveal her breasts…

Mia Vallis Rope Bondage and Gagged By The Fireplace