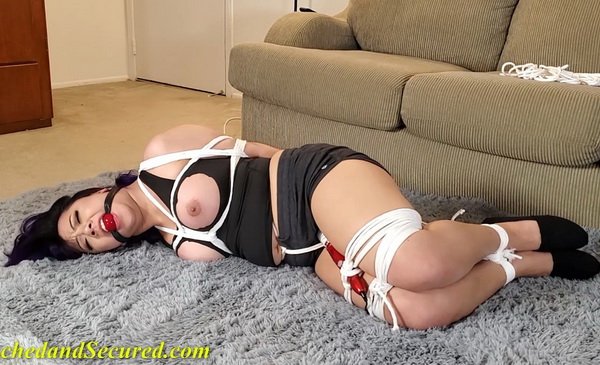 Katana had moved to her new home not long ago. She had seen her neighbor a few times. Not too much special about him, but he seemed friendly and he greeted her when passing her in the hallway, and so did she. One thing though that made her curiosity run into overdrive was the many different gorgeous girls who typically was some younger than he was visiting him. Katana knew she had to learn what made all these gorgeous girls visit there. One day she had a good feeling he’d be out and she could sneak in to snoop around. She entered the living room and was in for some surprise: a leather strap with a big rubber ball in the center of I, piles of ropes in all lengths and colors, a great amount of duct tape, pieces of torn clothing, and his computer, displaying countless pics of tied and gagged girls! She knew she should leave immediately, but couldn’t help but be overcome with a desire to see what such bondage felt like. She gagged herself and bound her legs tightly. Lost in the pleasant sensations of how the ropes worked, she did not hear her neighbor return. When his hand clamped over her mouth and yanked her from the chair, she knew she was in for a very difficult afternoon! Moving quickly, her tied her hands behind her, added even more rope to her legs, and bound her torso! Now fully secured, protesting and mewling into her gag, she could do nothing to prevent him from cutting holes in her top to expose her big tits! Despite her struggles, he easily placed her on the ground and hogtied the frantic girl, and for the finishing touch, tied a vibrator between her legs! When he switched it on, her eyes flew open and grew huge with shock at her violation! Still, she could not prevent her body from betraying her as she began to edge toward climax! She writhed and moan in embarrassment, shame and lust as the neighbor watched her cum again, and could do nothing to stop him from taking her phone! He explained that several of her lady friends would be receiving special text invitations form “her”, inviting them over, at which point they’d fall prey to the same tight bondage and torment! Katana moaned, but was it in sympathy for her friends, or was the vibrator working overtime? 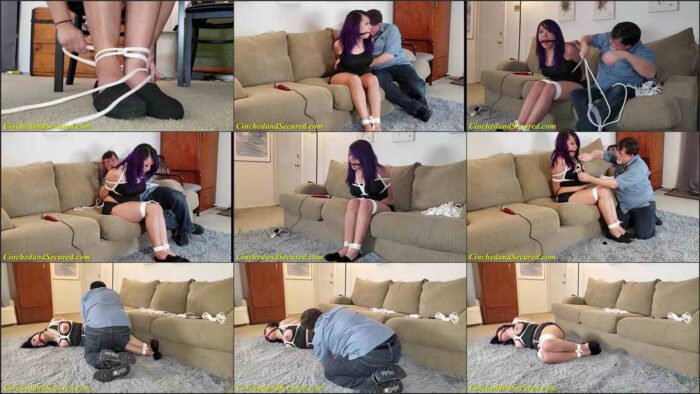