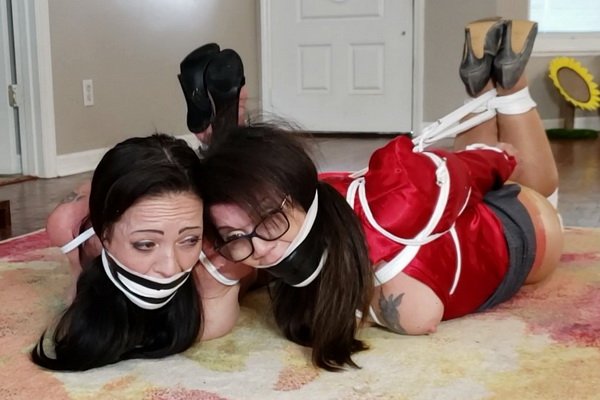 When Slyy returned home from a day out, she didn’t expect to find her step-mother bound and gagged and struggling on the sofa, and she CERTAINLY didn’t think that whoever had done it was still around! Unfortunately for the pair, the afternoon would feature a few more surprises, none of them to their liking! Slyy was commanded to strip until she was stark naked, and then found herself bound and gagged by the assailant! The HUGE ball gag strapped into her mouth was bad, the ropes fusing her elbows together were worse, but NOTHING was as bad as the crotch rope yanked tightly into her bare and unprotected pussy! Howling in agony, she squirmed and writhed as the madman wrapped electrical tape around her mothers already brutal gag before pulling her tits out of her blouse! The girls were left to struggle alone, and they did their best to free themselves, but their struggles were futile, although they did mange to thrash their way all over the living room. Displeased that the girls didn’t stay put as he had commanded, he hogtied the pair into near immobility, wrapping medical bandage and tape around Slyy’s already ball gagged mouth to punish her for her disobedience. As delicious as the pair looked whimpering into the ropes and gags, the intruder left the girls to thrash in their bondage. After all, he had other places to be. Of course, so did the girls, but THEY were definitely going to be missing their appointments! 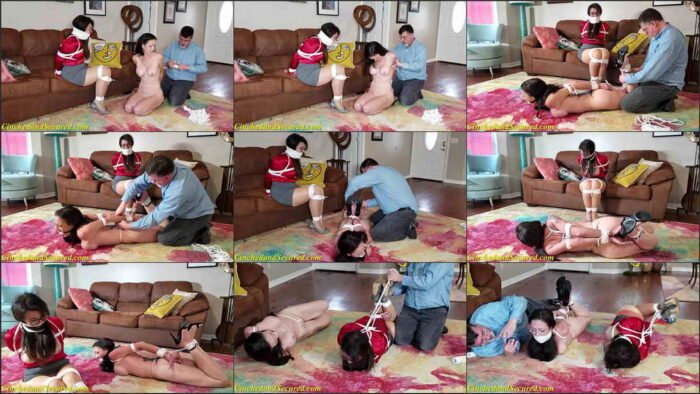