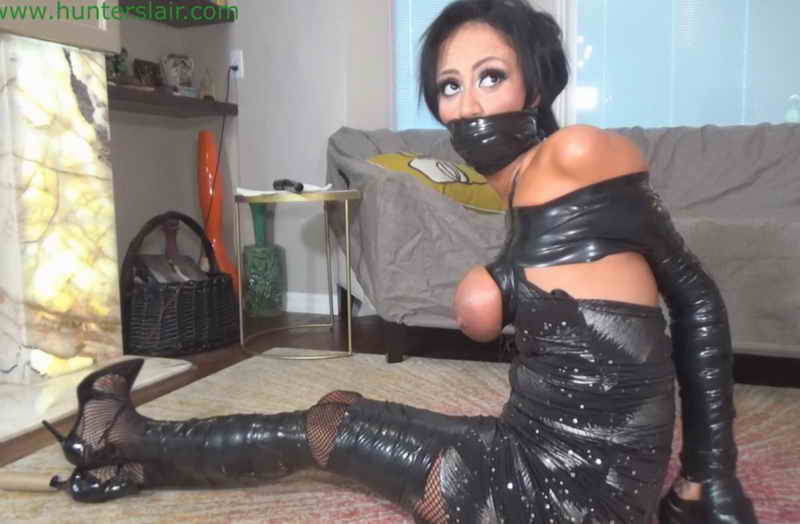 Miss Willow decides she wants to be bound in some tape for her first time with The Hunter. She sits on her little table as she anxiously awaits what’s he’s going to do with her. He first has her stand up and put her hands behind her back and get her wrists taped up first nice and tight. Then he sits her back on the table and he starts wrapping her ankles to her legs all the way up to her knees as compact as possible. The Hunter leaves her knees out band he wraps the thighs up strictly tight with his black tape. After he gets her legs taped up really good, he goes up and starts on her arms wrapping the tape as firmly as possible starting at her elbows going onto her shoulders. The Hunter wraps the tape across her chest as well to get those voluptuous titties ready as well while clipping her hair back. He starts taking the tape downward and after wrapping the chest goes onto the elbows down to the wrists being sure to strictly wrap them. He thinks he must go back overs the top portion of her arms and rewraps them up. He lets her sit and struggle quite a bit letting her get the feeling of being tapped up. First the left breast comes out of her shiny black halter dress the Hunter begins to wrap tied tightly around the base of her breast. Willow watches as her breast is tightly taped in a tourniquet of shiny black tape, until it begins to swell and bulge. Then he moves onto the right breast and tightly tapes it up the same way. After each of her huge breast ate tightly tape and throbbing, he cinches her enormous tits tightly together with more tape. One of the last things he decides to do is tape up her tiny little hands balled up as fists. Willow sits struggling around on her little tabletop of a seat wriggling in all of that tape from her ankles to her tits. After he finishes taping her tiny hands he goes to her face and gives he a nice and tight tape gag so she cannot speak, Willow can only moan in protest. She is moved to the floor next to a pair of scissors as a tease for her to get them. Finally, she is pushed over on her side into a tapped up into hogtie and told to escape. After watching Willow flail helplessly on the floor around for quite some time, he decides to cut her out of the tape starting with her gag first as she exclaims damn tape is something else! He moves to her legs next cutting them out of the tape as well exposing her sweaty legs. He then cuts out her horribly bound arms giving her some serious relief that was well needed. While he cuts her titties out of tape, he asks her what she thinks about tape bondage, she says the speaker wire was most defiantly her favorite. 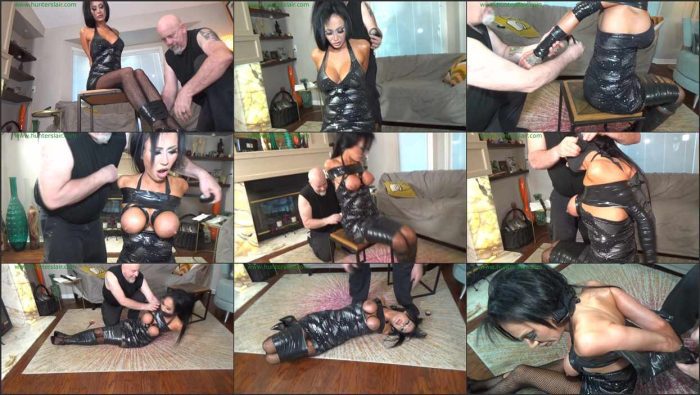