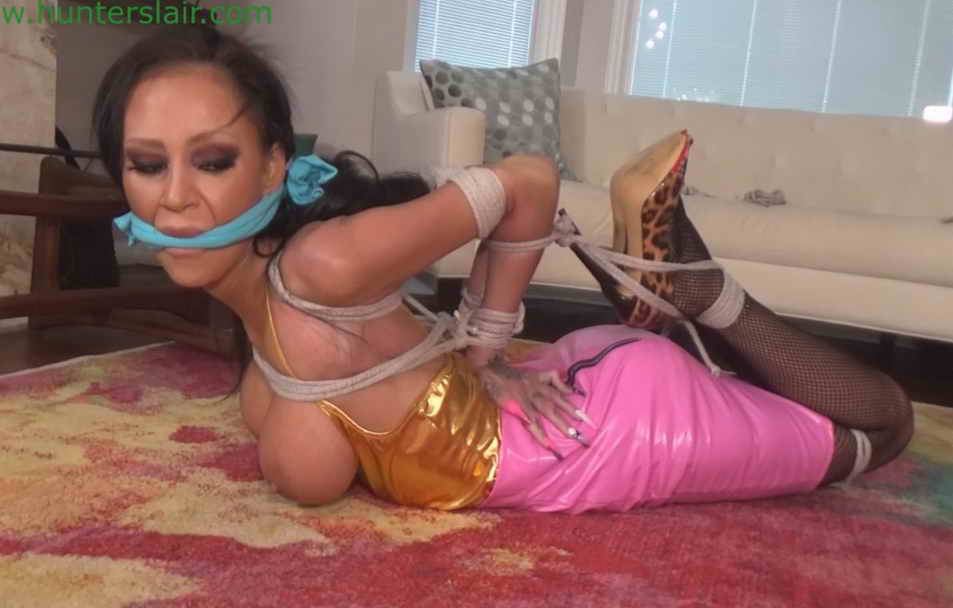 Busty Willow is back visiting the Hunter wanting to try something new and challenging. He asks if she had ever had her arms chickenwinged before. Willow has no idea what that even means what is is willing and eager to learn. The Hunter then ties her slender wrists tightly together behind her back then wraps more ropes around her biceps. Willow smiles as she feels her elbows kiss together behind her back as the Hunter wraps the ropes around her biceps and cinches it tight. He then demonstrates what a chickenwing is by pushing her hands up her spine causing her elbows to jut out from her back. He asks her to tell him when it becomes uncomfortable as he pushes her hands up high to her shoulder blades. Willow informs him that she is fine and demonstrates by keeping her hands up with her elbows jutting out from her back without his help. As she holds her arms in place, he wraps more rope around her shoulders then runs the rope down her spine and pulls it up between her bound wrists. Willow’s hands are now bound in place as he wraps the ropes around her chest and wrists before cinching the ropes between her bound wrists and back. Willow likes having her arms immobilized and tightly bound and discovers that she has never felt so helpless with her arms chickenwinged. He sits her on the sofa and grabs her long slender legs and ties her ankles and knees tightly together. Willow is moved to the floor and placed on her belly where the Hunter ties a rope between her bound stiletto heels. Her legs are bent then the rope is run up between her bound elbows and attached to the ropes wrapped around her shoulders. He tells her that he is going to pull her stiletto heels up until they touch her elbows. Willow laughs telling him that she doesn’t think she is that flexible, but the Hunter proves her wrong as he pulls the hogtie rope bowstring tight bring her stiletto heels within an inch of her elbows. Willow back arches like a cat with her tits off the floor with most of her weight resting on her hips. He asks her how she feels, Willow says that she kind of likes being bound this way and begs him to take some photos so she can see just how good she looks. He takes some photos then pulls out a long torn cloth and cleave gags her. He leaves Willow alone to struggles and squirm as best she can for a few minutes. The Hunter returns and slowly unties her as they discuss how she felt being so helplessly bound and gagged. 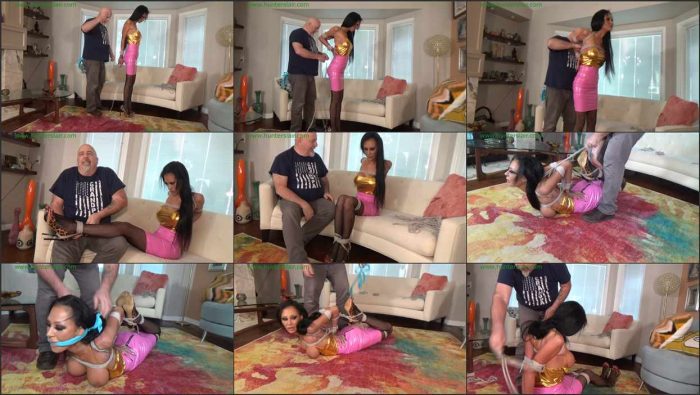 Natalie Charms Hung up by her elbows & crotch roped, with her big natural tits bound in steel, jimhunterslair