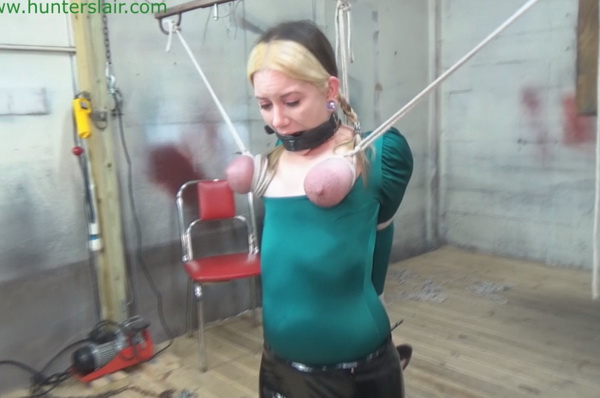 The Hunter has dreamed up another wild breast bondage predicament and needed a willing girl to practice on. Pretty Lexi Lane is his go to girl for any cruel breast bondage predicaments. She sits on a tall stool tightly bound and gagged. Her elbows are of course slammed behind her back the way she loves, with ropes cinched tightly around her biceps and wrists. Her shapely legs are encased in tight shiny spandex leggings and tightly bound and cinched together at her ankles and knees. A thick leather gag is pulled between her teeth for her to bite on but still be able to communicate. She watches anxiously as the Hunter sorts through a pile of ropes. He then comes over and pulls her right tit out of her shiny emerald body suit. A rope is tied around the base of her right tit then wrapped around and around her breast, the rope slicing deeper and deeper into her flesh with each wrap. Lexi gasps through her gag as her breast begins to swell and bulge as the Hunter ties off the rope. Moving to her left breast he does the same, tying another rope around the base of her breast then wrapping the rope tighter and tighter around her left tits until it also is swollen and throbbing. Lexi looks down at her poor swollen tits as they begin to turn color, then watches anxiously as the Hunter hangs a steel spreader bar from a chain that hangs down from an overhead pulley over her head. He then pulls the end of the rope tied to her right breast up to the end of the spreader bar and ties it off, then moves to her left breast and runs the rope from her left bound breast up to the other end of the spreader bar. Lexi is a bit scared now knowing that he intends to stretch her up by her brutally bound swollen tits. He presses the button on the remote which raises the spreader bar. Lexi’s bound swollen tits are pulled and stretched up in the air lifting her ass off the stool and pulling her up onto her feet. Lexi is now held up on her stiletto heel but her bound, stretched, swollen tits. The Hunter checks the knots and sees that they need some adjustment. He lowers her down and pushes up a kneeing stool then lowers Lexi down onto her knees. He reties, tightens and adjusts the ropes tied around her breasts then ties another ropes to her bound stiletto heels. He pulls her feet up running the ropes from her heels under her bound elbows then up to the center of the spreader bar. He pulls the rope taut pulling Lexi up onto her knee points her weight now supported by her bound tits. He presses the button again lifting the spreader bar up higher, pulling and stretching her bound tits again and lifting her up by her bound stiletto heels. The Hunter isn’t completely salified with the result so lowers her back down and pulls the ropes attached to her stiletto heels tighter. He then raises the spreader bar back up pulling Lexi back up onto her knee points balanced by her brutally bound, swollen tits. After a few moments of watching poor Lexi struggle to keep her balance on her knee points to keep from pulling and stretching her throbbing tits any more than necessary. The Hunter sees that poor Lexi has had enough and lowers her back down to the floor and begins to free her from the ropes. 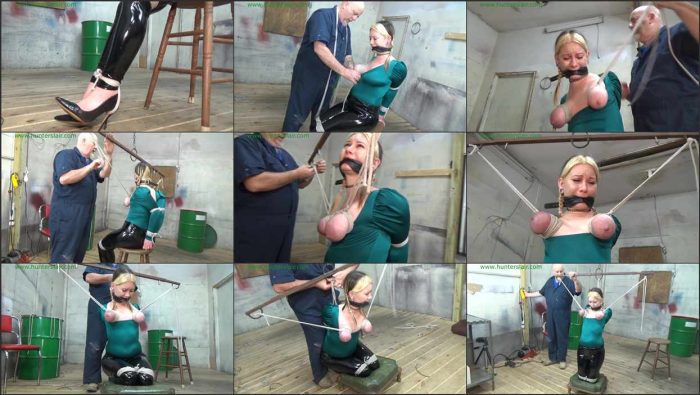