Home » Bondage F/F » Tying up & robbing the boss got her taped up, tied up, gagged with her sweater, her panties & left in a box, custom bondage video 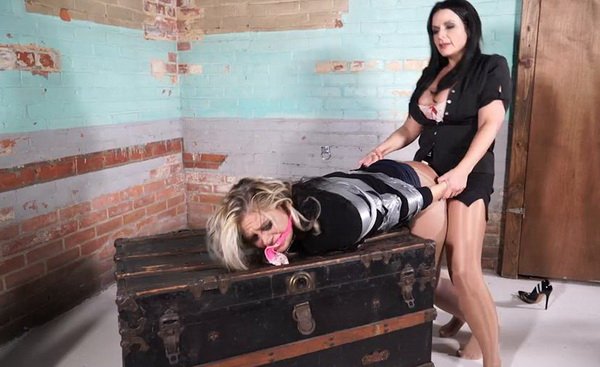 Adara has been working for JJ for a while. She comes up with a plan to rob her. She is apologetic while doing so and talks to her sweetly. She gags her with a giant gag and plays with her boobs. She knocks her out (several times). She hogties her on the floor and leaves here there. JJ is apparently an escape artist and gets out of her binds. She is going to give the dumb blonde a taste of her own medicine.

The next scene begins with Adara taped up and ballgagged in a metal cart which is pushed across the floor. She is knocked out while her new place of bondage is prepared- a chair. She is taped to the chair, groped and taunted and miserable. Her nipples are clamped, her mouth is stuffed with a part of of sweater that has been cut off of her. She is knocked out while JJ gets a new weapon- a huge dildo. She forces Adara to suck on it and slaps her face with it. Then she is leaned over the trunk, her pantyhose torn and her panties cut off, they are used as a cleave gag while Adara is banged with the strappon. Knocked out again, her pantyhose are fully removed and then she is in the stocks banged some more. It isn’t over Adara stands nude against the wall, those same panties are shoved in her mouth and her mouth is taped shut. Then she gets hogtied on top of the crate. Her nipple clamps get some rope added to them and are tied off across the room. She can’t struggle much up there. She is spanked and knocked back out for a while. Then the scene cuts to her in the box, some boob smothering, another KO and the box is closed and she is left inside. Girl next door bondage, So you are the bitch he hired to take my job!

Go ahead & tie me up but you aren’t getting paid, hogtied woman

Girl on girl bondage, the replacement for Simone

Adara Jordin and Fayth On Fire taped, hogtied – The maid saw too much