Home » General » Tied up Megan Jones in the 8 minute escape 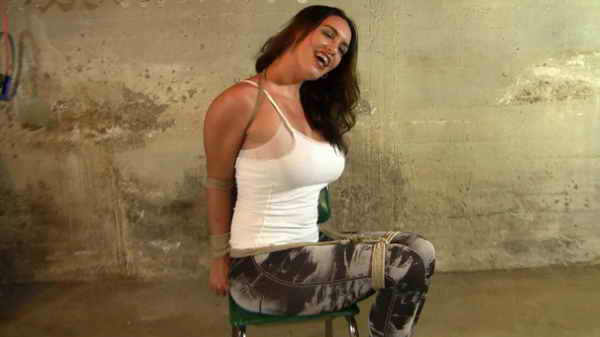 A girl is tied by Mr. Ogre in some manner. She is then given eight minutes to completely untie herself. During her attempt to escape, she is not allowed to damage herself in any way. If the girl is successful in her task to extricate herself from the bondage, she gets a prize and YOU get special bonus footage of another tie at the end of the clip. If she is unsuccessful, well…that is between her and Mr. Ogre…
Megan Jones comes through town and drops in to model for the Ogres World crew. She gets bound up in the hemp rope and struggles an awful lot in the shooting basement. She’s in a white tank and stretch pants with high heeled pumps. She wriggles and fights the rope trying her damnedest to get free.
She even starts the clip by glaring at Ogre. He has threatened her with getting a marker mustache if she doesn’t get out. But in the end, there is only one thing that matters: does she escape? Watch and find out!