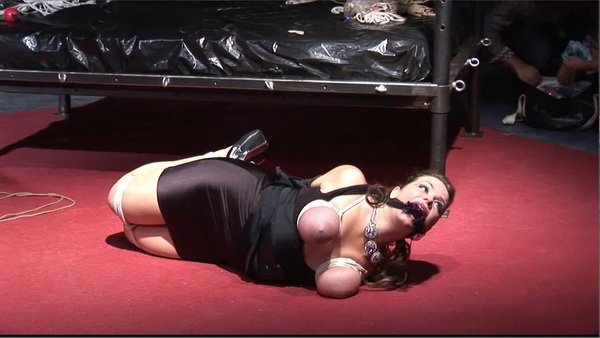 There is a yearly bondage event in Munich Germany called Boundcon. I just love the event. If you have been meaning to go, I highly recommend it. If you like bondage I can’t think of a better way to spend a weekend. Shibari, DID, metal bondage, leather bondage are all represented. There are various different stages with performances happening at all times aside from the behind the stage fan shootings. There are also about 100 vendors selling high end fetish goods. There is a VIP bar with a buffet that goes on all day and night. The VIP area has tons of sitting down to rest space with their own stage area. The organizer puts together fan photoshooting for people that would like backstage access to shooting people in the industry. Her major self bondage fail got her punished with more bondage. JJ clip