Home » Bondage F/F » This was something new in bondage for both of us! 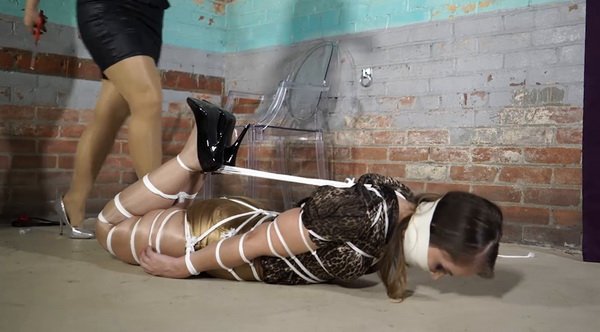 This was a custom video for hands to the side and then a hogtie with clothesline. Well I had never done hands to the side and Rachel had never been tied with he hands to the side. She is looking great in shiny everything and just because I’m not sure this tie is going to be difficult enough for her I decide to have her wear the 6? pumps to challenge her a little more. So much tying, I had her walk around that way. I had her sit in a chair that way. I hogtied her and then I pulled it up at the very end. She said the tie didn’t hurt at all but she couldn’t move at all which was really frustrating because it felt like she should have more movement and of course the heels bothered her. She got a ballgag and then a scarf, microfoam and duct tape & at the end a rope over that. This is the full custom and a lot of the cutting her out is shown as well- but first I give her the scissors and tell her to try to cut herself out. Not safe, I know but she lived.
ballgaged, bondage, custom videos, disco shorts, gagged girl, Rachel, rope bondage, shiny pantyhose Please stop! tried to scream Rachel. But a gag in his mouth would not let her do it.

Girl Girl bondage, It is payback time for the Corrupt Security Guard