Home » Bondage F/F » Please stop! tried to scream Rachel. But a gag in his mouth would not let her do it. 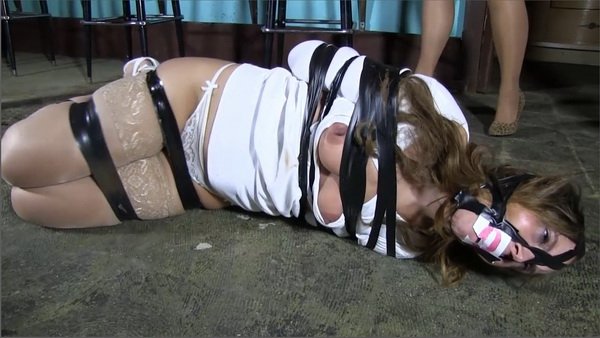 Rachel hangs up the phone at a dive bar she works at when an irate lady walks in yielding a weapon in her face. She wants to know where her dead beat boyfriend has run off too. He bought a motorcycle from JJ for $3500 and promised to pay a week later. Weeks later she hasn’t been able to track him down. The woman decides to take out her frustration on his little lady. She takes some tapes and puts her arm in an impossible position. Then she tapes up her strong legs. She stuffs two pairs of thong panties into the slender little things mouth and then makes her hop out from behind the bar. She is leaned on a post. Her fingertips are taped, her body is taped to the post, her mouth is taped to the post. The poor girl really doesn’t know where the asshole went though. He owes her money as well. The woman goes for a shot behind the bar and then returns to the girl removing her from the post, putting her on the floor, watching her squirm around, adding more tape to her gag and then hogtaping her. She’s not done though. She puts fresh lipstick on, kisses it and then tapes it over the girls face. A few minutes later she draws some eyeballs and tapes them haphazardly over the girls face. The poor thing can barely breathe, can’t see and her arms are killing her while she gets her white dress filthy on that floor… Don’t mess with the crazy JJ, it continues their brutal games.