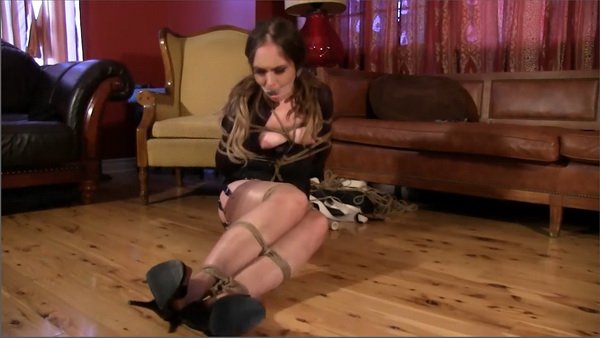 Rachel ran out of gas an knocked on a strangers door. She doesn’t know the woman is reclusive and terrified of life outside and lonely. So lonely she plans to take drastic measures to keep the pretty girl by her side. She gives her a drink that makes her tired. She comes to tied up a bit. She is forced to walk around leashed and tied up in her all heels. She is groggy like. She has been ballgagged and then tape applied to that. Her arms are tied up in a reverse prayer. She is forced to walk around more. She is tied to a chair briefly while her legs are tied. The gag is removed and a pantygag is applied with thin tape as a cleave, later her scarf is removed and added over that. She is ultimately hogtied and the crazed woman lays down to rest. She tells Rachel when she wakes up they will play more bondage games and that Rachel can tell her all about the outside world. The end scene shows Rachels gag coming untied. She seems sad and seems to have accepted her fate. She takes a drink of the sleepy drink and goes back to sleep..