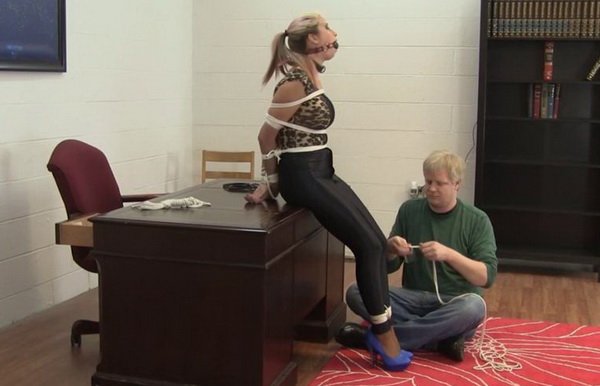 Holly was seated on Mr Big Boss’s desk legs crossed in her disco jeans and sheer cleavage top. He tells her that he’s asked her in there to get some high heel walking practice as he’s noticed that she’s got some wobbling in her walk. She asks if he’s going to test her and he tells her that he should to make sure that she’s stable. He grabs some rope and binds her wrists together tightly. Mr Big Boss grabs the ballgag next shoving it into her mouth and buckling it behind her head. Another rope is added on her elbows pulling them uncomfortably together and she’s collared and leashed for her walking training. An upper and middle body harness are added to pull her arms tightly bound to her body…