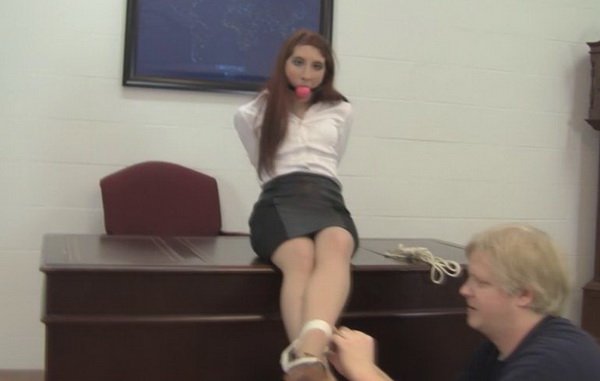 Mr Big Boss was waiting in his office for Gianna to show up. She arrives and introduces herself to him she’s a bit nervous as she hasn’t been with DiD long and she’s not gotten tied up by Mr Big Boss yet. He grabs some rope and wastes no time coming around the desk and binding her wrists together. After checking on Gianna’s elbow flexibility a little bit he spins her around a bit then binds her elbows together as she really starts to enjoy the rope. A red ballgag is produced and shoved into her mouth and then buckled tightly behind her head. She’s then put on his desk where her ankles are tied crossed and with the heel shackled onto her foot. After she’s thoroughly bound he unbuttons her shirt and starts fondling her a bit to sort of test the waters. She really starts getting into what is going on and moans accordingly from behind the ballgag…