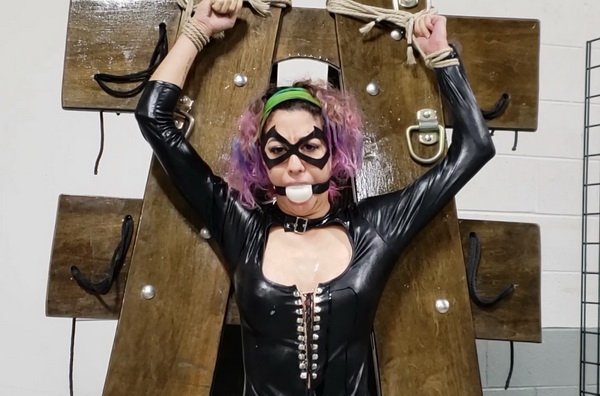 Sexy spy Simone has been a bit careless in her investigations, and now she’s been caught and bound to a giant wooden cross. With her wrists anchored above her and her legs spread, she’s in a very vulnerable position, all the better for interrogation by her arch nemesis! He begins by removing her mask despite the gurgling protests spilling out from around the ball gag that fills her mouth. Imagine his surprise when her true identity is revealed: innocent sweet Simone, the public librarian! Her captor is delighted, as he plans to show her a few things that won’t be found even in the most secret of books! Determined to get her to talk, he starts by exposing her big boobs and whips her breasts with a riding crop, delighting at how her screams echo in the space and the drool that pours from her gagged mouth. He escalates things by moving on to electrical torment, shocking her helpless body and huge natural tits with a violet wand until she is begging for mercy. Her promises to stop once she covers those massive boobs in her own drool, and, humiliated, the once powerful spy complies, long strands of spit dribbling down her chin to slowly slide down her nipples. Sobbing in defeat, her heart sinks when he brings out two very nasty clamps which are immediately affixed to her already throbbing nipples! Unfortunately, she learns immediately that her captor is not to be trusted, as he brings the wand back out to deliver more stinging shocks! Now that she has been broken, he leaves her bound and struggling to the cross as he leaves to prepare her final ordeal. As Simone sobs and drools, fighting desperately to free herself, she shivers in terror as she wonders what he has in store for her! 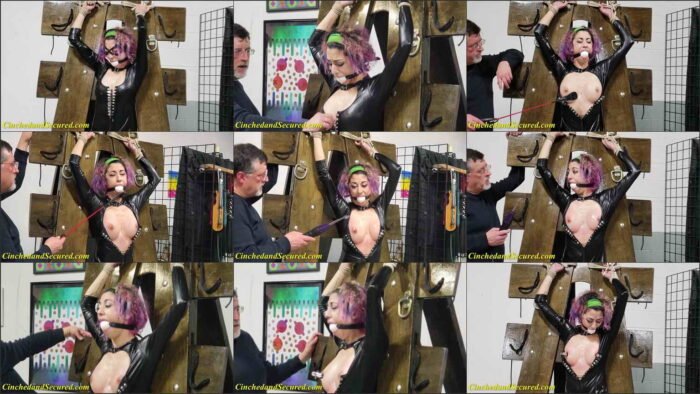 Simone – Wiping the Slate Part 2 of 2, Cinched and Secured