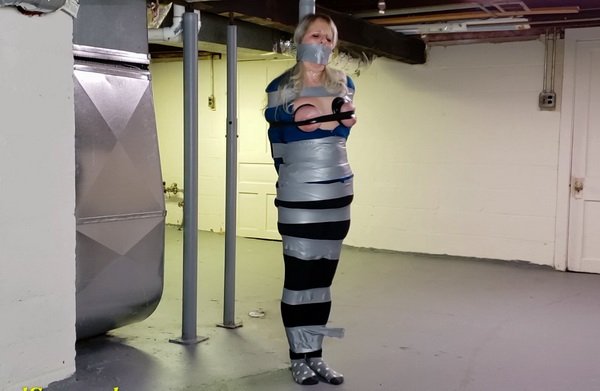 Lolly Gagg had one simple task: keep her mouth quiet, or else. Unfortunately, the big breasted girl decided not to follow that order, and mewled and moaned for all she was worth. You could hardly blame her. After all, being handcuffed and taped topless to a pole in a frigid basement wasn’t the most pleasant way to spend an evening, but her assailant didn’t care if she was comfortable or not. He returned to warn her once more, adding a few more circuits of tape to decrease her already limited mobility. Still, she didn’t obey, and so it was time to escalate her punishment. Her assailant wound black electrical tape around and around the base of each of her tits until they were swollen and felt ready to burst! Lolly howled into her ball gag, especially when he gave her nipples a few flicks for good measure, and left her alone to see if she’d absorb the lesson this time. Well, needless to say, she did not, so he returned to clamp her swollen nipples, and now the poor girl was in agony. He gave her an option: shake her bound breasts enough to dislodge the clamps, and he’d let her go. Desperate for freedom, she bounced and jiggled for all she was worth, her aching nipples suffering tremendously with each movement, but despite her efforts, she could not shake them off. Since she did not do as she was told, the assailant decided further incentive was in order and hung several rolls of tape from the chain connecting the clamps! Again she shook and bounced, trying to dislodge the clamps, and again, she met with failure. The stranger returned one final time, wrapping duct tape around her head, driving the ball gag deeper into her mouth and fusing her skull to the pole. To add insult to injury, he added more of the dreaded electrical tape to her breasts, compacting them until the poor girl thought they would pop! Left alone now for who knows how long, her echoing sobs showed one thing: She still hadn’t learned how to be quiet! 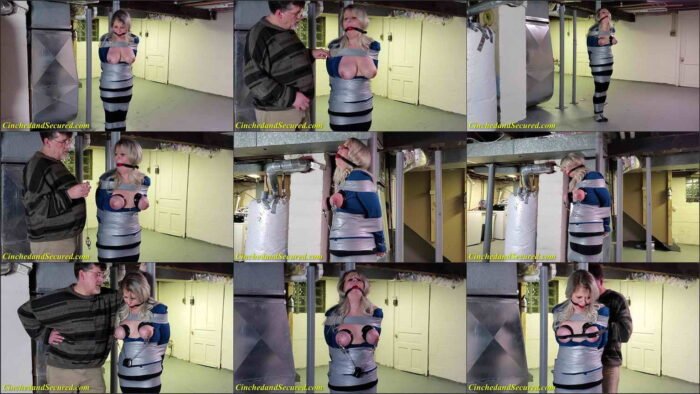